Easy to care for, planting and pruning will help you boost its growth and bear beautiful flowers.

Favor planting in fall or in spring but avoid freezing temperatures or high temperatures.

It is very easy to propagate flowering currant through cuttings at the end of winter.

Like most flowering shrubs, pruning serves to increase foliage density and enhance flowering year after year.

For the first year, only light pruning is needed that will guide the shrub into producing more stems.

No need to prune drastically, the flowering currant might suffer from it.

This is a regular pruning that can be repeated yearly, that increases the blooming and the growth of the shrub.

Finally, to recover a tightly-bound silhouette and avoid it growing sparse at the foot, you can prune drastically after a couple years.

Even though it is quite hardy, flowering currant does nonetheless fall victim to certain diseases and parasites such as powdery mildew and aphids. 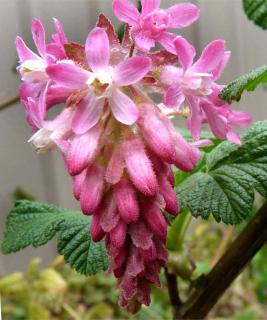 This shrub has the advantage of flowering abundantly in bunches, and this creates a true “wall of flowers” when planted as a hedge.

But it is also liked just as much when standing isolated in the garden, in shrub beds and even in pots or garden boxes on a terrace or balcony.

It is hardy and grows fast, which makes it an easy shrub to grow that will reward you with quick results.

Hardy to the cold and freezing, it can cope with temperatures dropping down to 5°F (-15°C).

A white-flowered variety also stands out:

If it grows too large or to renew its vigor, proceed to prune drastically every 4 to 5 years!

5 shrubs that birds find inviting in the garden
Here are 5 ideas of shrubs that birds love using for shelter. Each one is a dream come true for…
Currant and red currant bushes, growing delicious currants
Currant bushes, some of which are called gooseberries, produce marvelous small currant berries in summer. Current facts about Currant Name –…
September in the garden, tasks that will get you set for fall
Summer is slowly starting to turn its back away, and September is one of the key months for your garden…