What does “exotic” actually mean? Plants that come from far away? Plants that look weird? Crazy lush growth and greenery like a jungle? As a concept, “exotic” can mean many things. For the purpose of this article, we’ll go for the idea of a warm, wet, tropical atmosphere. Success in the project of creating an exotic garden, over anything else, rests on which plants you choose that are both hardy and growing with lush abundance: leaves, flowers, vining and palm-like silhouettes.

You might not believe it, but a south-facing strip of sunny land isn’t necessarily the best spot to reproduce a tropical ambience. Many exotic plants are used to growing in the moist underbrush of tropical rainforests. In South-East Asian and Southern China (Yunnan and Sichuan), many plants exist that look very exotic, but yet still cope well with winter temperatures like those we have in our temperate climates. The main difference is summer: over there, it tends to rain a lot thanks to the monsoon.

This will serve to guide us: our goal will be to maintain high moisture levels in the air during summer.

This situation is often easier to command along the coast, near a pond, or on north or east-facing plots. Possibilities also include man-made earthworks, such as digging out a basin or drawing up an artificial brook. Secondary parameters include: rich soil, not chalky; shelter from wind and harsh cold air.

You don’t need a vast expanse to simulate lush, abundant growth. The trick is to create a walkway, twisting and turning around living green obstacles, skimming around a pond or stream, be it running water or not.

Ready the area beforehand: surround it with local protectors

For this project of creating that specific, moist micro-climate that exotic plants need, you’ll have to add a few perfectly hardy plants that are well suited to the soil type and local climate.

After 2 or 3 years, that little cocoon is ready to welcome its first “fragile” plants:

Mulch is critical in this type of garden because it increases soil moisture and nourishes it with humus as it breaks down. Species that you can consider usually grow in tropical areas, but in high altitude, up to about 4,000 feet (1500m). Remember that less intense cold, say 14°F (-10°C), for an extended time period, can often be more detrimental than a sharper cold spell like 5°F (-15°C) which only lasts a short while. 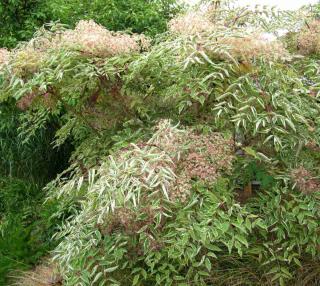 Leaves that are actually fronds with many tiny leaflets, like the Aralia elata shown here, have a magical effect: they let light trickle through, twinkling as the wind makes them flutter. This visual effect promotes the feeling of rich, lush vegetation. You’ll get this with:

The epitome of tropical lush growth is clearly the banana tree, with its large, shiny leaves. The hardiest among them is Musa basjoo ‘Sakhalin’ which simply needs a good layer of mulch to survive our winters. Extra protection will let you keep a stem alive from one year to the next. Musa sikkimensis ‘Red Tiger’ is also quite hardy and boasts red markings. 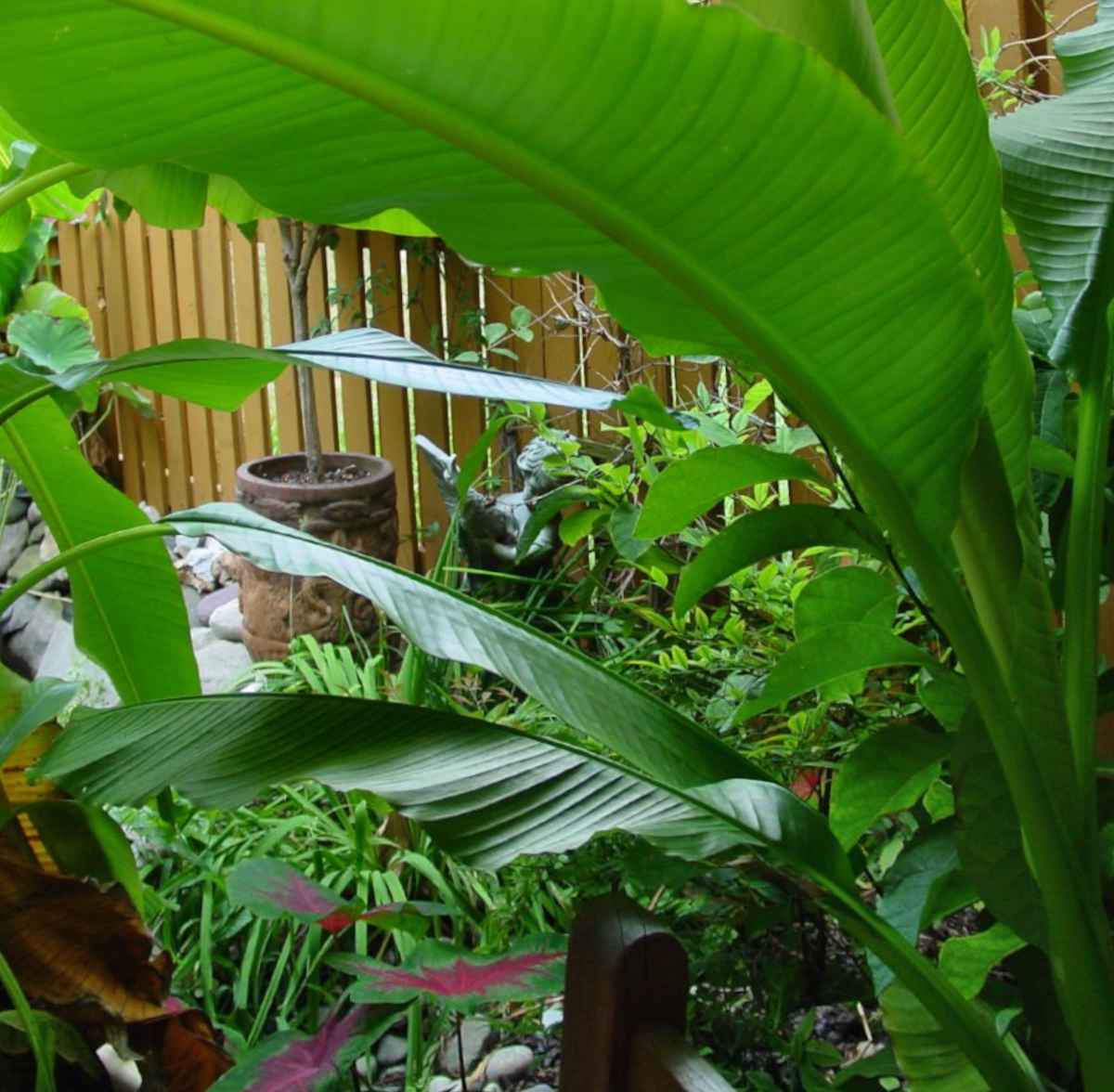 A more classic option that’s perfectly hardy is Paulownia tomentosa, easily kept from growing tall by cutting back to the stump every year. It bears very large leaves that are very effective at blocking out a fence or structure the shrub with arching, chandelier-like branches. 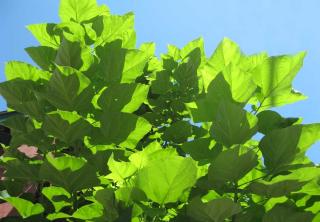 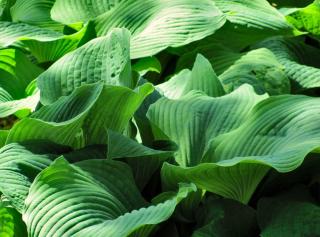 Play around with rare leaf shapes and colors, like a canna species that will have red-lined leaves, or the unexpected gigantism of a clump of Hibiscus moscheutos. Here, a ‘Sum and Substance’ Hosta which has particularly large leaves.

Exotic, out-of-the-ordinary bloomers should be preferred, like the fruit-flower of the pineapple plant Eucomis bicolor and Hedychium that has orchid-like flowers.

Below: bright light brought on by a Hedychium ‘Tara’. However, feel free to fill in void spaces with reliable local species, too, like flower-bearing solidage (Solidago), Rudbeckia, persicaria and ligularia. 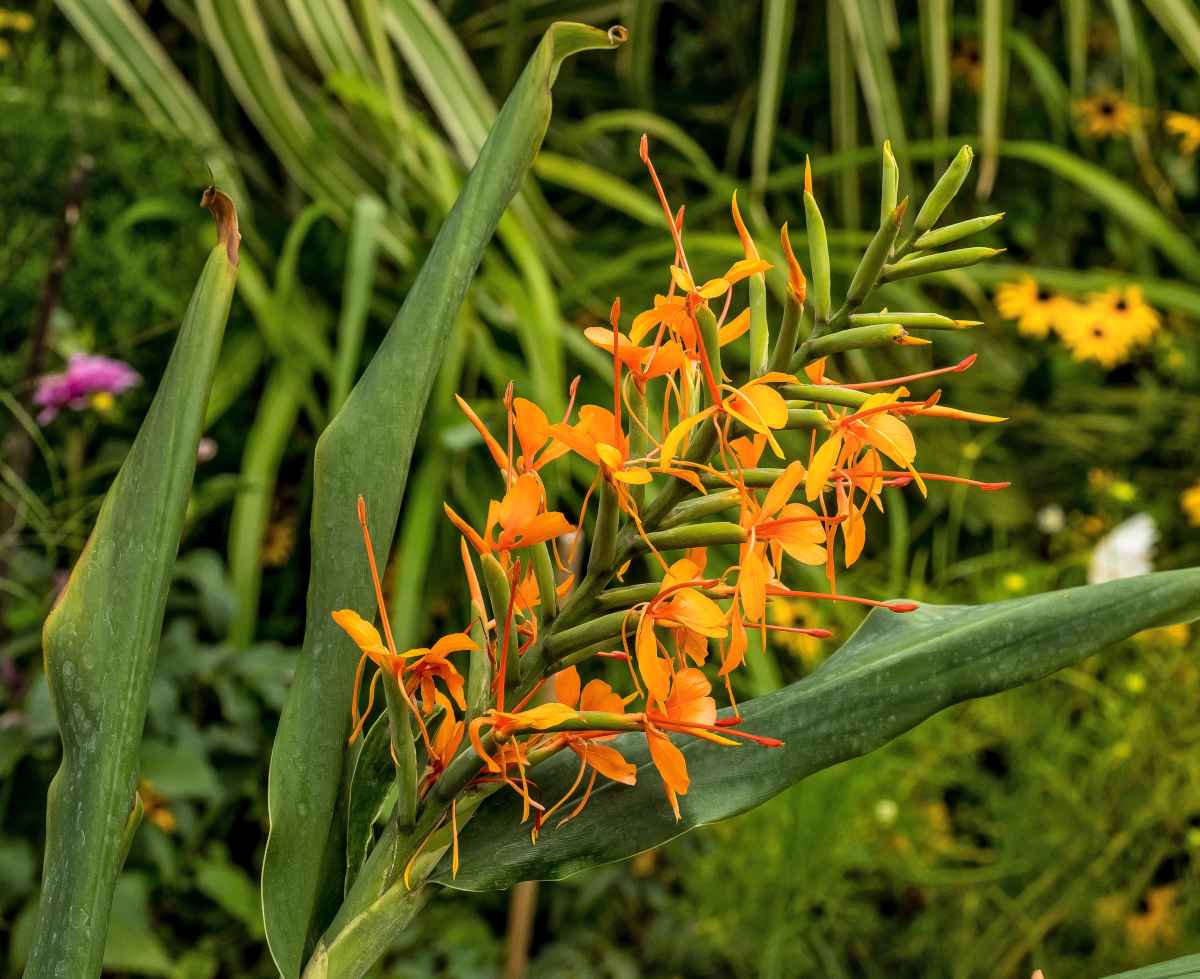