Plumbago auriculata is the type species for the Plumbaginaceae genus, but other species have different hues to share.

Here they are grouped by color. 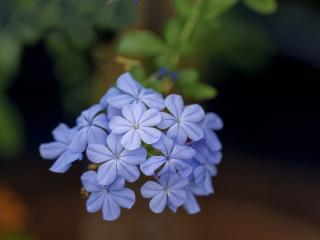 Most plumbago are shades of blue, the plant’s natural color. It attracts desired pollinators best.

Shown above, the beautiful ‘Imperial blue’ variety has a light blue color. Stamens are shorter and barely reach the rim of the flower petals.

Harder to find, this variety now only appears in conservatories across the United Kingdom. It’s sometimes possible to visit and ask the keeper for a cutting of this rare plumbago.

Plumbago ‘Escapade’ was developed as a range of plumbago flowers that grows very well in pots and containers. There are two colors: white and blue.

PanAmericanSeed Company developed these varieties two decades ago, and they are no longer protected by any form of plant patent. This means you can propagate them at will! 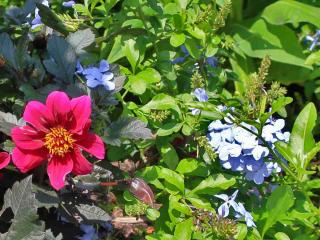 This plant currently goes by the trademark name “Royal Cape”.

This is a reference to its common name, “Cape Leadwort”. 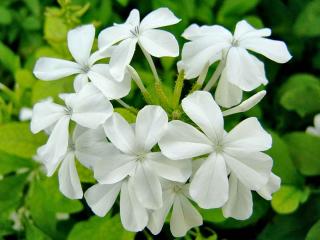 There are less white varieties, since natural colors for plumbago are in the blue range.

There are still a few options to grow, perfect to dress a wall in a white-flowered garden.

The Monite plumbago is a sport of the ‘Monott‘. One day, one of the plants grown in the production nursery had a random mutation that had an interesting side-effect: flowers weren’t blue but pure white!

The nursery owners propagated the plumbago stem and the mutation was preserved. Today, it’s sold under the name “White Cape”, but ‘Monite’ is the botanical name for this variety. 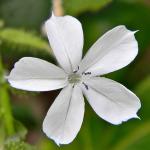 This is a different species of plumbago altogether.

Its bright white and petals have a pointed tip.

It typically grows as a ground cover flower. 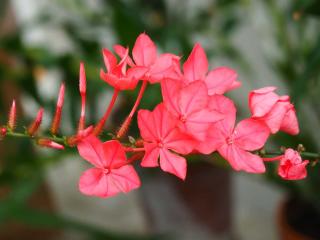 It is native to South-East Asia.

It also grows as a vine, and flowers form beautiful, slender clusters of red flowers.

8 great blue flowers for a garden covered in blue
Blue flowers are a favorite these days in many gardens. Why so? And can you succeed in growing a sea…
6 pink-blooming flower shrubs and trees for a pink garden!
From Spring to Winter, dress your garden in lovely pink blooms. To decorate your terrace, turn your hedge into a…
Trees that are full of color, especially in fall
In fall, their branches seem bejeweled with gold, bronze, and ruby red colors. Make the most of November to plant…