Flower clusters form near-opaque balls of color that are fabulous in every garden!

This plumbago variety isn’t very hardy and is often grown as an annual wherever it might freeze in winter.

Plumbago Monott is usually bought as a potted seedling, but occasionally seeds can be found online.

To plant your Monott plumbago in the ground:

Since October 2010, the plant patent expired and it’s now part of the public domain. There aren’t any restrictions and you can propagate this plant for both giving and profit!

The best way to make sure any new plants are identical to the mother plant is to take cuttings from your Monott plumbago.

Additionally, it’s possible to gather and sow seeds. Another technique that works well is layering.

Hardiness of the Plumbago “Royal Cape”

This variety is happiest in warmer climates. Consider temperatures of lower 20s°F (-7°C) as the limit under which a plant will die.

Caring for your plumbago “Monott”

Only the first year requires attention, unless the plant is in pots.

Other than that, once your plant is well established, it will survive droughts of almost any duration when in the ground.

This sun-craving plant can cope with part shade but blooms best when in full sun.

Planting your Plumbago Monott in rich soil will ensure it blooms properly. As an alternative, you can also remediate to poor soil by giving the plant fertilizer every two to three weeks.

This type of plumbago tends to send out long, arching fronds.

Other than that, simply cut out deadwood whenever you notice it.

It’s possible to prune your plumbago into a lollipop shape, with a single stem and a bush of sprigs on top, but you need to stake it because the trunk won’t bear the weight.

Even if you might notice thrips or aphids, they won’t bother the plant, nor will they keep it from blooming well.

Learn more about the Monott Plumbago

Whereas flowers of the normal common plumbago have distinct petals, on the Monott variety they tend to fill out nicely and overlap.

Flowers are a violet-blue hue that is close to indigo.

After producing the plant by the thousands in a nursery, a special white-flowered variety appeared. This direct descendant of the Monott variety had the same shape and size but the flower was entirely white. Today, it’s sold separately under the name “Monite” plumbago.

Like most plumbago plants, the flowers are very appealing to butterflies and moths. Luckily, leaves aren’t as interesting and usually you won’t have to fend caterpillars off.

Deer won’t nibble at the plant.

Propagate your leadwort from trimmings when you snip away, that will make perfect gifts for family and friends a couple months later! 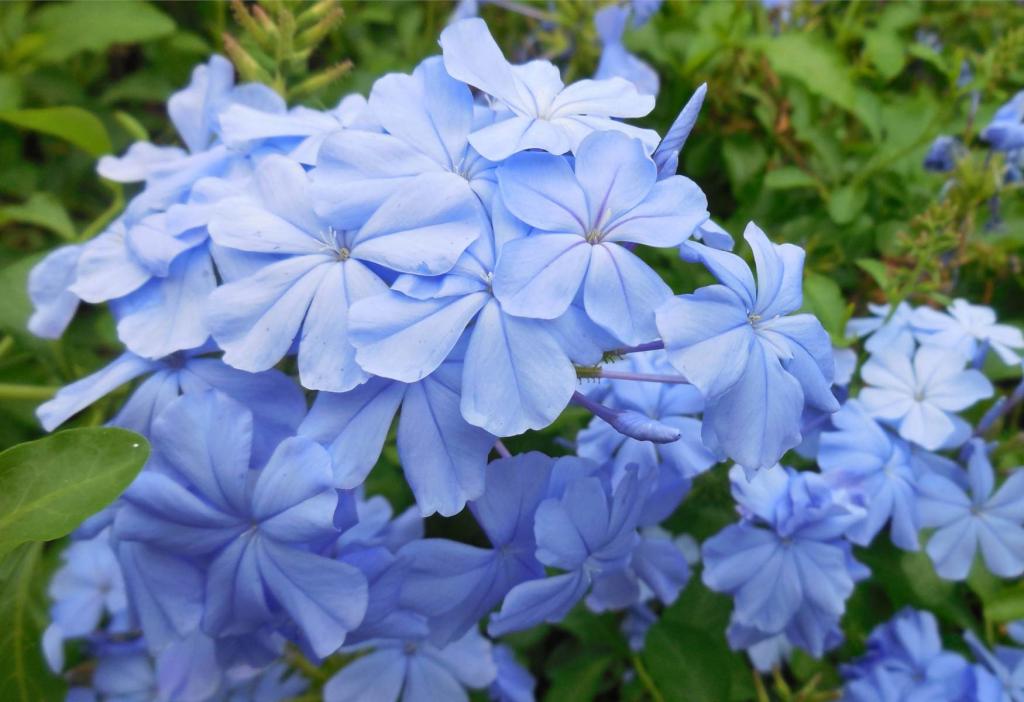 Plumbago, Cape leadwort – a magnificent climber
Plumbago is a superb vine noted for both its flowers and its foliage. Key Plumbago facts Name – Plumbago auriculata Former…
Plumbago cuttings, an easy way to propagate this climbing plant
Cuttings are often successful with plumbago. They're the way to go if you want a perfect copy of your beloved…
Plumbago varieties, colors and climbers galore!
Several outstanding cultivars are available in garden stores. Here are a few special Plumbago varieties. Plumbago auriculata is the type…