Home » Gardening » Trees and shrubs » Types and varieties of red or yellow dogwood, like fire in winter!

Dogwood trees illuminate the garden in winter with their colorful red and yellow bark and elegant, wispy shoots that wrap themselves in diamond-like sheathes of frost. The stylish abstract bearing adds a modern touch to the garden.

They’re easy to grow and care for, and have a significant influence on biodiversity in your garden. Also, you can pair them with other flower-bearing shrubs to form flashy bright-colored hedges that will always sport bursts of color even as seasons come and go – without the hassle of constant pruning.

Dogwoods collectively form a vast family of shrubs that stand out from other plants thanks to either of two characteristics: their blooming (Cornus florida, kousa…) or their very colorful bark. When planted in numbers in front of a building or against an evergreen hedge, these “bright bark” shrubs showcase streaks of color that truly warm the winter air. 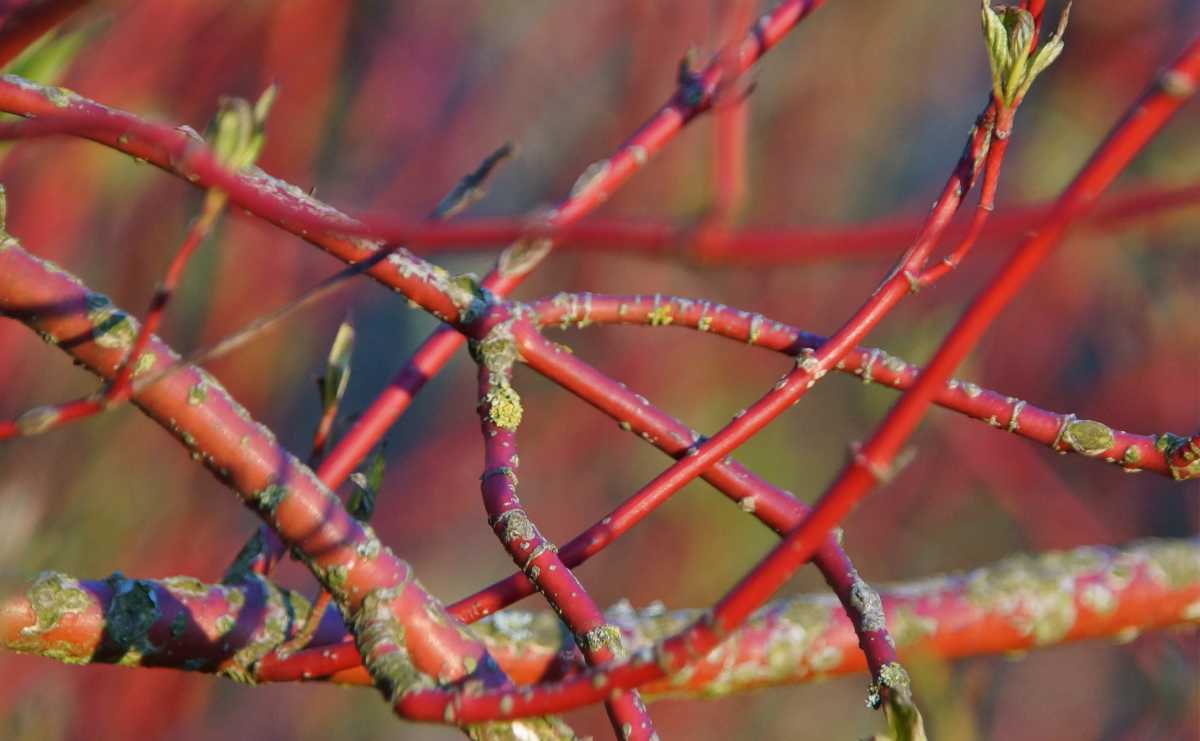 Moreover, these types of shrubs are easy to grow, though their vigor depends on the cultivar (3 to 10 feet or 1 to 3 meters). They’ll settle in any type of soil, be it moist or dry, chalky or not. During the vegetation season, as they lay low and stay inconspicuous, they help the surrounding nature with abundant melliferous flowers and berries that garden animals love.

On top of that, the leafage is occasionally variegated with either white or yellow, helping to bring a little light to dark corners of the garden. In fall, all that foliage turns to beautiful shades of velvety dark red or smooth golden yellow.

How to identify a dogwood tree?

Leaves are marked with sharp, visible veins. They’re opposed (meaning they go by pairs along the stem), oval shaped with a pointy tip. Try folding a leaf in half, and then delicately pull the two halves apart: sticky, rubbery filaments stretch between them.

2- A range of red, orange and yellow bark to choose from

The white dogwood (Cornus alba) is actually not white at all: it has bright blood-red bark, just like other species such as Cornus sanguinea and stolonifera. Native to Northern China and to Siberia, its hardiness is second to none. Tall, upright shoots emerge from the ground directly, since it tends to sucker from the roots. In the wild, it grows tall very fast, reaching 10 feet within 5 to 7 years, but most specific cultivars aren’t as vigorous, generally topping out at around 6 to 7 feet. It can cope with wet soil. Flat, cream-colored flowers appear in May. They’re followed by white or slightly blueish berries (the actual reason for the “alba” part of its botanical name), which stay on the tree from August to November. In general, Cornus alba all have red bark, even violet for some varieties like the ‘Kesselringii’ which also sports purple leaves.

The blood dogwood is a native shrub that many keep for its flamboyant fall colors. It also unsheathes thin, shiny red shoots that are like sabers of light in the garden. A particularly astounding form is Cornus sanguinea WINTER FLAME® ‘Anny’ which has bright, light-catching orange-yellow shoots, tinged with red. It’s nickname is the “neon Cornus ” or “neon dogwood”. 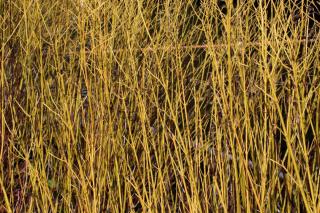 Originally, the species had red bark. Some cultivars have recovered this original trait:

3- How to care for a colorful bark dogwood? 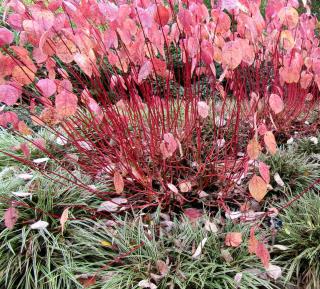 They aren’t very demanding. They’ll be happy with direct sun if the climate doesn’t get too dry. Prefer part shade if it does. The only work you’ll have to do will help highlight the beautiful new growth: prune back very low at the beginning of spring, all the way down to 4 inches above ground level (10 cm). From the stump, tall 4 to 6 foot shoots will emerge (1.50 to 2.00 m). This young, first-year bark is the most colorful of all, and it’ll appear in all its splendor when leaves have fallen away in winter. This annual pruning is very easy to perform. As an added benefit, it helps contain the tree’s growth, keeping it manageable.

>> Learn more about this shrub: Tips on growing and caring for dogwood

Plant dogwoods in clusters of 3 to 5 specimens; select different varieties and colors to increase the contrast with surrounding plants.

Indigo rose, a tomato variety for small, black cocktail tomatoes
'Indigo Rose' tomato key facts: Botanical name – Solanum lycopersicum Family – Solenaceae Type – fruit vegetable Height – 6…
Spectacular blooming in heath soil, 8 stunning shrubs
Each type of soil and climate will favor different combinations of plants. Heath plants are known to grow best on…
8 great blue flowers for a garden covered in blue
Blue flowers are a favorite these days in many gardens. Why so? And can you succeed in growing a sea…