Mirabilis is a family of flower shrubs that are often amazing when planted in a garden.
Each species is unique but care is often similar.

Proper care for most of the species is the same. In all cases, Mirabilis tends to spread easily, so carefully check its boundaries or it will turn invasive.

Planting Mirabilis in the garden

Mirabilis plants are often sold for planting in Spring.

Once your Mirabilis is established, it will bear seeds. It’s easy to grow Mirabilis from seed.

Since most mirabilis species bloom in the afternoon or evening, it’s best to plant it in a spot that gets afternoon sun. This is on the western side of a house, garden bed, or hedge. The blooming will be more intense!

How to prune and trim Mirabilis flowers 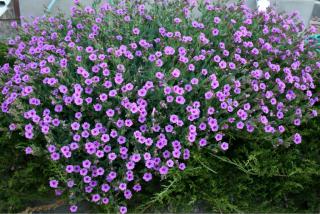 Mirabilis plants don’t need any pruning. They won’t develop any woody parts and in colder climates will die back in winter.

When the blooming starts, you can trigger more blooms by removing dead or wilted flowers.

Since seeds have a high rate of germination, any patch of Mirabilis will quickly start spreading after the first year.

Mirabilis plants aren’t frost hardy. In case of frost, airborn parts will die off. However, if the freezing is mild or if you’ve added mulch, they will certainly sprout from the tuber (roots) in spring.

The most famous Mirabilis flower is Mirabilis jalapa, also called the four o’clock flower. It is commonly sold in garden stores for its fragrant flowers.

Interesting Mirabilis species include the following:

All Mirabilis plants originated in the Americas.

Learn more about the Mirabilis family 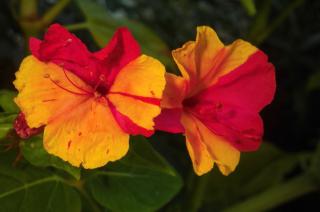 Plants of the Mirabilis family are often called four o’clock flowers. This is because their blooms always tend to open in the second half of the afternoon, around 4 pm.

The sun’s heat starts to diminish, which triggers opening of the flowers. More pollinators are active at dusk thanks to the cooler temperatures.

Flowers are fragrant and release a deliciously scented odor during the entire night.

If you’re fond of sleeping with windows open in summer, plant Mirabilis under your room window outside. The fragrance will call on peaceful and restful dreams and lure you to sleep!

Credits for images shared to Nature & Garden (all edits by Gaspard Lorthiois):
White Mirabilis (also on social media) by titanium22 under © CC BY-SA 2.0
Violet Mirabilis by Patrick Standish ★ under © CC BY 2.0
Red and yellow mirabilis by Candiru ★ under Public Domain
Meet the community
Need advice? Share your garden joys & woes!

Wasp, a reputation that deserves a makeover
Always a hassle around the picnic basket, sometimes even a painful sting, the wasp doesn't seem to manage positive vibes,…
How to grow tomato, the perfect guide
Tomato is a vegetable-fruit that is among the most eaten produce in the world. Tomatoes are also the first plant…
Growing Barberry indoors
Although often grown as an outdoor hedge, it's possible to grow a small barberry shrub inside. Simple care and a…