Why stay so down-to-earth? Nothing keeps you from looking up and reaching for the sky! What if you let yourself be seduced by hanging plants?

Bringing your plants up also means lifting up your own eyes to admire them, helping them to feel at ease, planting with colors and surfaces. Like many others, we also have the goal of sharing to the public at large the joy of being surrounded by plants, and this site uplifts any plant that can turn into a live, natural decoration! Now, up to you to choose your hanging plants, to determine those that will dress up your interiors as autumn slowly plods near. Here is our own idea on the topic and offers a selection of plants that is quite interesting…

Ceropegia woodii is native to South Africa. Its name was attributed by Carl Linnaeus who built it from two Greek words: kêros which means wax and pêgê, fountain.

The Swedish scientist felt that this plant indeed looked like a fountain of wax. With its twisted stems as thin as string and its heart-shaped leaves with watery designs, this plant is a boon for creative imagination!

Ceropegia woodii tolerates luminous or slightly dark spots. It appreciates moderate watering and checking that the soil has dried out before watering again is recommended. 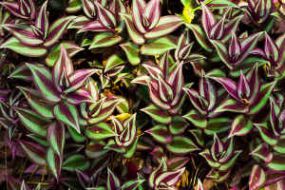 This gem hails from the entire Americas… it is found from Canada down to North Argentina. With its foliage that is sometimes tinted with a dab of pink or red, even silver and gold, Tradescantia immediately gilds the inside of any house. But this treasure also has more hidden gems, too, like its striking blue, white or pink flowers.

Tradescantia requires little water and doesn’t tolerate stagnating water. This plants appreciates it when the soil mix dries off before being watered anew. Mottled varieties must be placed in a luminous spot if you want to preserve the panache leaves, otherwise they’ll turn a monotonous green.

If the tip of the leaves turns brown, it means the soil isn’t moist enough.

Rhipsalis, what a haircut!

This thornless cactus, nick-named Coral Cactus, is native to moist Central and South American tropical forests, as well as Africa and other islands from the Indian Ocean. Its surprising structure, with long leaf tendrils that quickly extend, will feel just right in trendy environments designed to confuse perspective.

Rhipsalis appreciates lightly sunny emplacements but doesn’t tolerate full sun. Let the soil dry off before watering. And if the tendrils extend too much, give the plant a haircut! 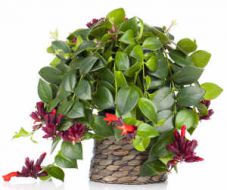 This very sensuous plant is a Malaysian originally. In some countries, aeschynanthus (pronounce es-ki-NAN-tus) is indeed called the lipstick plant because of its deep red flowers hidden in almost violet tubes. What catches the eye first, though, is its abundant leafage, surprising and stratified and which cascades like Rapunzel’s hair from the window. It is such an eye-catcher that it suffices to furnish an otherwise minimalistic room. Aeschynanthus delights in luminous rooms but not in direct sun. It only needs watering once a week in winter. In summer, though, best to water twice a week, albeit moderately.

Meet the community
Need advice? Share your garden joys & woes!
Live from the forum
Laburnum has stopped flowering Some garden interests. Hazel that changes the leaves colour Sudden change with my papaya My Lemon tree is blooming but not setting any fruit

Growing an avocado tree from seed
Although growing avocado tree in the ground is only possible in tropical regions or in the Mediterranean area, it is…
Air purifying indoor plants, why the hype?
There are air purifying plants that are able to cleanse the air inside our homes. Much more polluted than one…
Poinsettia, star of Christmas
Poinsettia is one of the cutest indoor plants, often quite remarkable around New Year's and Christmas. Summary of Poinsettia facts…