In our gardens, every living creature has a place. It’s all a question of balance! Precious services are rendered even by every single snail in our lots, even though their population must be controlled. Let’s take a closer look at this surprising little gastropod…

A snail’s body: strange but effective!

The shell, similar to limestone, comes in many different shapes and colors. It protects the snail from predators, and also insulates it from extreme cold or heat. When danger lurks, the snail retreats inside its shell and starts spitting out mucus, a slimy substance that quickly forms a bubbly cloud around it.

How does a snail move?

The snail’s body is a mass of muscle in which the vital organs are sheathed. It’s called the foot of the snail. Saliva is what makes movement possible. As the foot contracts from front to back, it releases mucus to coat the ground as it goes forward. How fast is a snail? About one millimeter per second. 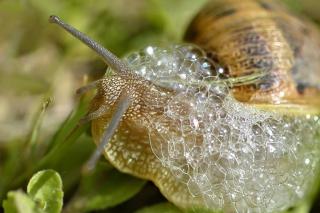 Frothy foam around a snail: this is the snail’s way of protecting itself from aggression.

Weird or wonderful, in any case a quirky gift of nature, snails are actually hermaphrodite. Each snail has both female and male genital organs, both of which intervene in the reproduction process. Two snails must meet in order to reproduce.

Love dart: The mucus that coats the love dart is loaded with a special class of hormones. These hormones protect the sperm from simply being dissolved by the receiving snail, thus ensuring that genetic material carries on to the next generation.

This curious mating ritual can last up to ten hours. Both snails penetrate and fertilize each other.

Benefits of having snails in the garden

Finding snails in your garden is actually a good sign. It proves you have good-quality soil, since snails are very picky and flee even the smallest traces of pollution. It must however be said: snails are a real burden when it comes to protecting hard-grown salads and cabbage.

Nonetheless, certain species of snails are truly useful in the garden. Some of them, like the Ruminia species, eat eggs and larvae of other snails and slugs, and digest insect or worm cadavers to release their nutrients in the soil. Others are scavenger snails, breaking down dead organic matter, moss, and fungus and mushrooms (even the poisonous ones). Thus, snails are truly part of a balanced garden.

A word of wisdom:

“Life is what our inner self wants it to be. We shape and form it like a snail builds its shell.”

Brussels sprouts, all there is to know about growing them
Brussels sprouts are vegetables that are mineral-rich and great for intestinal transit when cooked. Basic Brussel sprout facts Name – Brassica…
Tomato pinworm, techniques and treatments to avoid and cure the disease
Tomato pinworms are native to South America, and appeared in France in 2009 in the Drôme area. Since then, they…
Forgotten heirloom vegetables… rediscover the tastes of old!
In the age before industrial agriculture, there were over 1000 varieties of vegetables in people's gardens... an incredible heirloom which…