Ok, let’s be honest – the toad doesn’t really have a good reputation in all our folklore and legends. It’s, to say the least, not very handsome, and often appears in stories as an evildoer’s acolyte… remember those witch brews calling for a few toad’s warts…

Ah, reality is a very different thing! Even though it looks repulsive, this relative of the much cuter frog is an effective helper in the garden that will also work wonders in the vegetable patch.

Part of the larger Bufonidae family, the toad is more specifically a anuran vertebrate amphibian – “anuran” means “without a tail”. Unlike the frog, a toad is a terrestrial amphibian.

Actually, the name “toad” is unique to English: most other languages are based on the Old German root word “krappa” which means “hook“.

The most common species in Europe is the common toad (Bufo bufo). However, there are a great many other species, for instance the natterjack toad (Epidalea calamita), the common midwife toad (Alytes obstetricans), the yellow-bellied toad (Bombina variegata), etc.

In North America, the hop toad is very common (Bufo americanus, renamed to Anaxyrus americanus or American toad), which, like the Woodhouse toad (Anaxyrus woodhousii), has a habitat that nearly spreads across the entire continent. The boreal toad (Bufo boreas) is a bit more common in western parts, whereas Fowler’s toad (Bufo fowleri) appears more on the Atlantic side.

It’s quite easy to correctly identify a toad. It has a short, stocky body and a large, flat head. There are many warts all over its skin. The fingers and toes aren’t webbed very much, and the front legs are arched whereas the hind legs are rather small: it can’t jump very far. To narrow down the species, let’s take a look at the differences.

As an example, the natterjack toad is very similar to the common toad, but there’s one distinguishing feature: it has a lighter line marked along the center of its back. Of course, the yellow-bellied toad is aptly named, since it displays a lively yellow color on its underside.

When it’s not around and about hunting, a toad prefers hiding out in a dark, moist spot. It hibernates during Winter, most often underground where it digs a shallow burrow. Sometimes it’s content with a hole in an old stump or a crack between rocks. 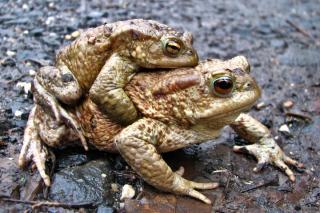 When the mating season rolls around, this terrestrial amphibian is capable of going pretty far to try and find a mating zone (from 100 yards or meters to nearly 2/3ds of a mile or 1 km). When she’s found the right spot, the female toad lays its eggs in water. They’re connected to each other like the rings of a chain. After a while, tadpoles hatch. They’ll spend the first phase of their life in water, then will evolve to spend the rest of their life on the ground. Some toads such as the common midwife toad have a more surprising approach: the male is the one carrying eggs round, attached to its hind legs until hatching.

Usefulness of the toad in the garden

The toad is a carnivore, and it isn’t interested at all in orchard fruits nor in vegetable patch crops. There is absolutely no risk at all of a toad eating your harvest. So what does a toad chow down on? Insects of all sorts, and even more: centipedes, spiders, caterpillars, slugs, snails… it gets much clearer now why toads are truly beneficial animals in the garden and veggie patch! Having a toad here and there is a cheap and perfectly organic solution to replace chemical pesticides.

Sadly, though, due to both urbanization and the increase in use of phytosanitary products, many previously habitable spaces have disappeared. It becomes very difficult for any toad to find a proper habitat, and several species are threatened by extinction. The family as a whole is protected and appears on the IUCN red list. If ever one appears in your garden, protect it just as you would a hedgehog.

Welcoming a toad in the garden 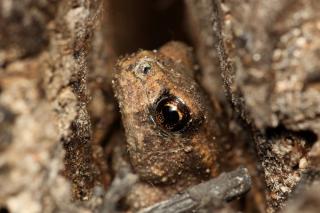 Even though the toad is a mostly terrestrial amphibian, it still requires water, at least for reproduction. There’s a much higher chance of attracting toads to your garden if you’ve set up a body of water such as brook, pond, waterhole, etc. It doesn’t need to be on your land: having one nearby is enough. For shelter, the toad doesn’t require much. But you can always give it options it might find appealing, such as an upside-down clay pot or propped-up shingle. Also make sure the drain under the garden faucet is accessible. There are many ways to protect this precious garden helper.

One fact that contributes to the toad’s bad reputation is that it excretes a toxic venom. This venom exudes from the toad’s outer skin when pressed. On humans, the venom can’t penetrate through our skin.

There is absolutely no risk in handling the toad with bare hands – however, it’s very important to wash your hands well afterwards. And don’t touch your eyes and nose before you’ve done so! 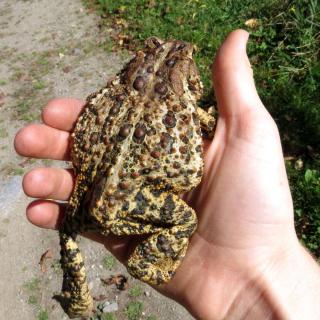 Pets, on the other hand, aren’t as lucky, especially dogs. Since they instinctively bite the toad with their mouths, the venom enters the body directly through the mucus linings. From there, it spreads throughout the blood stream. The toad’s venom acts on the heart and nervous system.

When an animal is poisoned by toad venom, the first symptom is abundant salivation. If there was a lot of venom, the animal might might start to vomit and show signs of fatigue. Attacks on the nervous system typically involve shaking, convulsions or abnormal gait, meaning the pet can’t walk correctly anymore.

In case of toad poisoning, the first thing you should do to protect your pet is to rinse its mouth with running water, abundantly. After that, if further symptoms appear, quickly call the veterinarian for an emergency check-up.

Smart tip about the toad

Unlike snakes, a toad doesn’t voluntarily inject its venom. The substance is simply present in the toad’s skin, and is automatically released when pressed. So it isn’t like the amphibian is trying to attack, it’s simply a natural defense mechanism.