The botanical name for it is ” Pulmonaria officinalis“. Lungwort is a herbaceous plant instantly recognizable thanks to its hardy but silk-like clump and ornamental blooming. Red-violet flowers and large leaves dotted with white spots.

In earlier times, young stems were included in mesclun and greens, and larger leaves, steam-boiled, would be a fine replacement for spinach. What are the health benefits of this plant, and how should one prepare it to extract the highest therapeutic benefits from its compounds?

With many names indeed – Lung’s herb, Our Lady’s milk drops, Mary’s tears… – lungwort as a medicinal plant seems to have been discovered during the Middle Ages. Later research showed it to already be very much appreciated for its delectable taste during Roman times, when its stems were part of the “healthier” side dishes during meals.

The Middle Ages brought more knowledge about the plant’s medicinal value, specifically as it relates to breathing ailments. That’s when the root name of the plant emerged, “Pulmonaria”. In those days, people considered the plant a sign of God, since the fact that leaves shaped like lungs could actually heal sick lungs was thought to be more than just a simple coincidence.

Today, lungwort is actively cultivated in most parts of Europe, especially in wetter regions of France and Switzerland. Initially known for its expectorant properties, more medicinal benefits were subsequently discovered and attributed to the plant. It has proven its effectiveness in dealing with cough, bronchitis, sore throat, tuberculosis, and asthma. Additionally, scientists have demonstrated that it helped control inflammation and it is now a common ingredient in the making of astringent products. 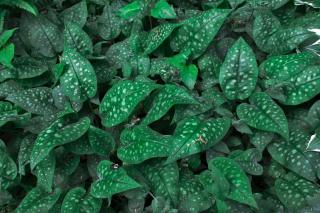 A typical use for it is as an evening infusion, particularly to treat bronchitis. Lungwort then imparts expectorant and emollient activity.

Because it favors flushing out of toxins and increases miction (urinating), it’s a powerful mucolytic, diaphoretic and diuretic.

Generally, it’s also known to support anti-inflammatory and astringent activity in the body: it tightens soft tissues, treats chapped lips and skin, dry patches or scabs, and even hemorrhoids.

Due to its soothing and relaxing effects, health professionals recommend it in case of respiratory ailments (sore throat, chronic and acute cough, asthma, tuberculosis).

The anti-inflammatory activity it displays is why it is much appreciated by patients who suffer from laryngitis.

How to prepare and use lungwort 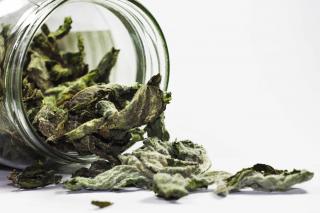 Dried leaves are what is most often used to prepare lungwort infusions. They are of course available in pharmacies, but it’s equally possible to collect and dry leaves on your own.

To learn more and to avail of a personalized dosage plan, it’s essential that you contact a doctor.

Credits for images shared to Nature & Garden (all edits by Gaspard Lorthiois):
Lungwort on moss bed by Sheila Sund under © CC BY 2.0
Cover of leaves by Jereme Rauckman under © CC BY 2.0
Leaves in a jar by J.W. Vein under Pixabay license
Meet the community
Need advice? Share your garden joys & woes!