A tree native to China, the Ginkgo is considered to be a living fossil that has survived for over 300 million years.

It can grow to heights of 80 to 165 feet (25 to 50 m). This tree, also called silver apricot, maidenhair tree, 40 gold coin tree or Ginkgo biloba grows on cool siliceous clay or siliceous soil.

It belongs to the Ginkgoaceae family, and it is now often found in parks in large cities (since it resists pollution very well) but there are also large ginkgo commercial plantations in South Carolina (USA), in China, western France, Korea and Japan.
However, apart from the ornamental appeal of its leaves, the silver apricot bestows us with surprising medicinal properties. Which are these? How does it work on the human body? How should it be used well?

According to research, Ginkgo was around 40 million years before dinosaurs even appeared. Indeed, History shows that Ginkgo is the only living being to survive the blast of the Hiroshima nuclear bomb during World War II.

Some might think that this resilience is the reason Buddhist monks worship this tree and plant it near their temples to keep fire away.

The 18th century is when this plant was introduced on European territory.

A living being that can be called immortal, this resilient, superior and unique plant shares therapeutic benefits discovered since Antiquity in traditional Chinese medicine.

– flavonoids (an important source of antioxidants in our diets),

As a powerful antioxidant, Ginkgo has multiple types of activity on the body.

Scientists have shown that this plant enhances arterial functions, and its leaves are used as a natural remedy to:
– reduce inflammation
– support blood circulation
– protect nervous cells
– alleviate pain in peripheral vascular diseases.

As part of a treatment course, Ginkgo biloba is recommended for:

This already long list of possible treatments that ginko biloba permits can be extended further still, since it also helps stave off Alzheimer’s disease, cardiovascular diseases and can even restore cognitive functions for elderly persons who are in proper health.

Usage, dosages, and how to use Ginkgo biloba 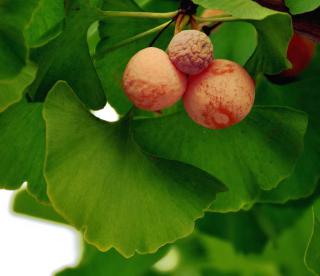 The portions of the Ginkgo biloba plant that are used to treat blood circulation and mental health are the seeds and leaves.

After 7 minutes, filter and add a dollop of honey or lemon juice before drinking 1 to 2 cups a day.

Good to know about Ginkgo biloba

Ginkgo biloba is also an ornamental tree that has a lifespan that can exceed a 1 000 years.

It can trigger hemorrhage. That’s why it is contraindicated to pregnant women and intake should be stopped for anyone at least 3 days before any surgical operation.

Whatever your situation, simply talk with your doctor about taking this herb.

Credits for images shared to Nature & Garden (all edits by Gaspard Lorthiois):
Ginkgo leaf harvest by William Ismael under © CC BY 2.0
Ginkgo branch with fruit by Rachid under © CC BY-NC 2.0

Meet the community
Need advice? Share your garden joys & woes!
Live from the forum
Beans with healthy huge leaves but no fruits Dracaena marginata kiwi stalk health lupine healthy but leaves beneath are curling up

Treat bloating and aerophagia naturally with plants
Breathing is a vital process for all living beings, and for humans in particular. As a person breathes, a whole…
Physalis, winter groundcherry, a plant with many therapeutic properties
A plant full of health benefits native to Peru, Bolivia and Columbia, Physalis grows near houses and buildings in gardens…
Watercress usage and medicinal properties
In the 16th century, watercress was already known and grown for its medicinal properties, and only slowly started being used…