A biennial plant native to Asia and to Europe, great mullein stands out with a tall, upright cottony stem which grows between 3 and 6 ½ feet (1 to 2 meters) tall. It has a taproot and large, deeply grooved leaves that are oval in shape and are covered with whitish woolly hairs.

Its blooms are golden yellow and are quite large, with their 5 uplifted petals that are grouped into cymes along the stem.

This plant has leaves that are up to 20 inches (50 cm) long. It grows on mounds and in prairies.

Apart from this description that shows how beautiful this plant is, what are its health benefits and medicinal properties that are so famous? What does it heal? How can it best be prepared to best maximize its effects?

Let’s have a look around… 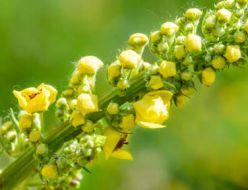 Belonging to the Scrophulariaceae family, great mullein or common mullein is the vernacular name of the plant, the root word of which is the ancient Gaul celtic word bugillo.

Also called grand chandelier, Saint Fiacre herb, velvet dock, and quite interestingly cowboy’s toilet paper, possibly due to its feathery broad leaves, this plant was attributed magical powers since Greek and Roman times because it was used to ward off evil curses.

As time passed, its medicinal properties were recorded by Dioscoride (a Greek botanist) who noted that its roots were used to treat lung diseases.

A bit later, in the 11th century, the flowers and leaves of this plant sometimes called Our Lady’s candle were a favorite of Saint Hildegarde when treating changes in the voice due to viral infections.
In the Middle Ages, the sap of great mullein was extracted to treat hemorrhoids and gout.

Much later still, in the 18th century, the name “Great mullein” appeared in the Trévoux Dictionnary where ailments such as stomach ache, rear-end disorders, chest pains and even dysentery were said to be cured by its therapeutic benefits.

Recently, scientists have proven that the flower of common mullein contained compounds like glycyrrhizinic acid which have anti-inflammatory properties as well as antibacterial and especially anti-tumor effects.

In herbal medicine, leaves and flowers of cowboy’s toilet paper are used.

Since they’re very fragile, the flowers from Saint Fiacre’s herb must be hand-picked.

Although there hasn’t yet been systematic double-blind testing for each, one can still remember that the properties of great mullein are numerous and make it a very respected plant in herbal medicine.
A true anti-inflammatory, antispasmodic, analgesic, wound-healing, antitussif, antibacterial and relaxing agent for irritated respiratory tissues, great mullein is a medicinal herb that functions through its covering and expectorant properties.

This plant can be used both internally and externally.

The plant-produced substances (mucilage) of great mullein are emollient and are natural softeners for which the main result is the “conversion of sugars into a sort of protective covering”. The saponins that it contains are generally known to be expectorants. These 2 active ingredients, when paired, make this beneficial plant, a very effective remedy against certain respiratory tract disorders, for example tracheitis, laryngitis and cough.

As for the iridoids and its analgesic, antispasmodic and anti-inflammatory properties, this medicinal herb is recommended to treat cutaneous irritations, stomach aches and bouts of hemorrhoids.

To sum it up, when used internally, great mullein is:

– an expectorant: it slows mucus generation and works towards expelling it. Consequently, this medicinal herb alleviates symptoms of certain respiratory disorders listed earlier, including bronchitis and when you’ve lost your voice.

– an emollient: it reduces spasms and inflammations caused by painful diarrhea and enteritis.

– an antitussive: it soothes dry cough.

For topical use, remember that great mullein is:

– a wound-healing agent in the case of hemorrhoid and otitis treatments. For that, after having macerated the wooly mullein flowers in olive oil, it becomes an excellent remedy against these ailments.

Usually, the flower from the hairy mullein is part of the famed “Four-Flower tea”.
Indeed, to soothe cough, this herbal tea is prepared from cudweed, poppies, marshmallow, coltsfoot, violet and mallow.

The emollient activity it induces it a game-changer for patients suffering from colitis, stomach aches and even painful diarrhea.

In still other cases, it is possible to have recourse unto great mullein thanks to its medicinal properties:

– diuretic that helps eliminate fluids from the body

To this can also be added its capacity to diminish pain in case of acute cystitis.

As for its essential oil, it is prescribed to fight against dermatitis, frostbite and catarrhs.

Usage, dosages, and how to use great mullein

To avail of its soothing properties, here is how to prepare ingestion of great mullein:

After this, scoop up 1 table spoon of this blend, pour it in the boiling water. Let it sit for at most ten minutes or so. Add honey when ready and drink.

You can also prepare an herbal tea that is mostly comprised of great mullein dried flowers: 0.07 oz (2 g) or 3 to 4 teaspoons of flowers infused for ¼ hour is enough. Drink 3 or 4 cups as the day goes on.

– as a tincture, ingest 1 to 4 ml in the morning, at lunch and in the evening. If need be, follow the manufacturer’s recommendations.

– as an infusion: boil ¼ quart (¼ liter) water. Toss in 1 table spoon great mullein leaves and dried flowers. Filter, then drink one cup, which is about ¼ quart (¼ liter), 2 to 4 times a day.

– in the form of poultice to soothe dermatitis, hemorrhoids or frostbite, boil dried leaves in milk for 5 minutes.

– in capsule form: 1 to 1.5 grams micronized dried powder (3 capsules) before meals is the prescribed dosage for a daily course.

When used internally, great mullein infusions or decoctions require careful filtering since the flowers and stamens contain hairs that tend to irritate your throat.

Good to know about great mullein

However, the European Medicines Agency contra-indicates this plant for:

– children under the age of twelve

As a precaution, it is recommended to procure your dried great mullein flowers at a herbalist’s or in a pharmacy because seeds of some varieties can be poisonous.

Although the rest of the plant isn’t dangerous in the least and doesn’t lead to any disorder, great mullein seeds must be eliminated from extracts, capsules and infusions.

If in doubt or if symptoms persist or worsen, it is imperative that you consult your family physician.

Meet the community
Need advice? Share your garden joys & woes!
Live from the forum
smallish blue wildflower with tall stems and glossy leaves in meadow Beans with healthy huge leaves but no fruits Dracaena marginata kiwi stalk health lupine healthy but leaves beneath are curling up

Garlic health benefits and therapeutic value
Garlic, or Allium sativum, is a bulb perennial about 12 to 16 inches (30 to 40 cm) tall, which we love for its nutritional properties, taste…
Physalis, winter groundcherry, a plant with many therapeutic properties
A plant full of health benefits native to Peru, Bolivia and Columbia, Physalis grows near houses and buildings in gardens…
Scutellaria skullcaps to treat anxiety
Native to North America, blue skullcap or mad-dog skullcap is a herbaceous plant of the mint family that, if well…