Typically, when one thinks of wild hellebore, what comes to mind is the rare Helleborus foetidus. But there are other varieties that also exist in the wild, such as Helleborus argutifolius, a species that’s endemic in Corsica, Helleborus viridis, a cousin of the stinking hellebore that’s even more rare, and also Helleborus niger, which you can occasionally come across if you go hiking in the lower alpine mountain rangers.

Stinking hellebore, sometimes called dungwort or bear’s foot, is, without a doubt, the most common wild hellebore in Europe. Sinking hellebore grows in vineyards, in woods, and in vacant lots, wherever there’s chalky soil. Hardy down to 5°F (-15°C), it can be found in all altitudes up to 5000 feet (1600m). 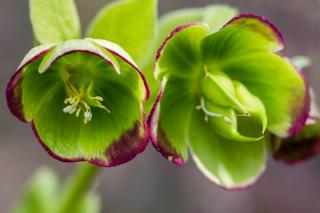 This perennial sends up smooth stems, quite hardy, that are 1 to 1½ feet tall (30 to 40 cm). Each stem lasts 2 years, making the stems biennial. At the beginning of the blooming, the hellebore stands upright, but then as time passes, it hunkers down closer to the ground. The species produces a dense carpet of leaves under the blooming. A great many small bell-shaped flowers are supported by each cyme (stem). Each flower is from ½ to 1 inch across (1 to 3 cm). What color are they? Pale green with a purple rim.

Helleborus viridis : a rare wild relative of the stinking hellebore

Green hellebore is a close relative of Helleborus foetidus, and what marks the difference is that the flower is entirely green, without any purple rim. It blooms later on in the season. Much rarer than Helleborus foetidus, Helleborus viridis is a perennial that spontaneously sprouts in deciduous forests, on cool and chalky soil. A plant that loves part sun, it doesn’t like sunny spots at all. Hardy down to 5°F (-15°C), it can be found in elevations up to 4500 feet (1500m). 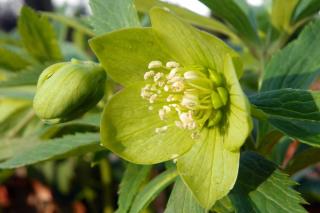 Green hellebore is a non-caulescent species, meaning it sends leaves and stems up directly from ground level instead of growing stems. Nonetheless, it reaches heights of 8 to 16 inches (20 to 40 cm) when it blooms. The basal leaves are deciduous, with deep serrated edges, lobed and lightly palmate. Flowers are pale green in color, slightly over an inch across (3cm), and they’re set at the tip of long stems.

Helleborus argutifolius : this hellebore is endemic to Corsica and Sardinia

The Corsican hellebore is an endemic species in Corsica, and it’s also native to Sardinia. It grows in the wild among other flowers in thick underbrush, atop mounds, and on the sides of ravines. This evergreen and hardy perennial also copes with colds down to 3-5°F (-12/-15°C), and it survives drought easily.

Helleborus argutifolius is actually the tallest hellebore there is, since it can reach up to 5 feet tall (1.5m) when the growing environment is good. Its leaves are thick, palmate and serrated, with a deep green color. Each simple flower is 1 to 2 inches across, with a pistachio green color: they cluster in groups of 10 to 30 flowers at the tip of tall floral scapes.

Good to know: Helleborus argutifolius is a sub-species of Helleborus lividus, a species that is endemic to Majorca.

Helleborus niger : commonly cultivated, but originally found in the wild 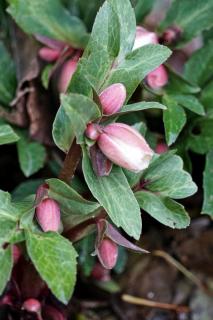 Helleborus niger, commonly known as Christmas rose, is a species that is often grown in gardens and in pots. Originally, though, it was a wild species native to Central Europe. Today, it is naturalized in many more regions, where it occasionally pops up in forest settings in low-altitude mountain ranges. This perennial is hardy down to 5°F (-15°C), and often begins spreading in deciduous forests and chalky areas.

The Christmas rose is a poisonous grassy plant, with green, red-streaked stems reaching up to a foot or a foot and a half in height (0.3 to 0.4 m). Short, blackish rhizomes are typical of this species, together with leathery, bright green evergreen leaves. Each floral scape bears between 2 and 4 flowers that are 2 to 4 inches across (5 to 10 cm). Often single flowers, occasionally appearing in pairs, and their color starts out white then shifts to pink as time passes.

Flowers from winter through spring, every month gets its blooms!
Each season brings its own sweet charms to the garden. But after a foggy autumn and a biting cold winter…
Black hellebore, stunning once the confusion of what’s black is cleared
Black hellebore key facts Botanical name – Helleborus niger Common name – black hellebore, white hellebore, Christmas rose Family –…
Winter planting
As long as it doesn't freeze, it’s possible to work on flowering the garden or the balcony even in winter.…