Winter is cold and unsuitable for plant growth. When spring comes around, everything bursts into bloom! How do plants set their clocks to bloom at the right time? Vernalization is one of the mysteries of the plant kingdom. Plants mark a number of chill hours as a “Ready, Set? Go!” countdown for spring!

Seasonal cycles, nature is all but constant

Nature constantly swings from one extreme to the next: night and day, winter and summer, sun and shade… Plants stay put and must find ways to cope with all this change!

Surviving winter is one of the most difficult challenges of all: harsh cold weather freezes water. Water is life, but when it freezes, it turns into razor-sharp crystals! Plants go dormant in winter to avoid having to deal with burst sap vessels. How do they know winter is over? How do they know it’s safe to get that sap running through their veins again?

Slamming on the brakes in winter

It helps to understand how plants actually grow dormant in fall and winter. It’s in their DNA! Among the thousands of genes coded in the two intertwining strands of DNA, several are special: they trigger dormancy.

One “slow-down” gene in particular is called the “Flowering Locus C” gene, “FLC” for short. When cells code this gene, it produces specific proteins and compounds which block flower growth. FLC has a flower-repressing function: flowers can’t form and develop when the blocking compounds course through the plant’s system.

In a way, this gene on the plant’s DNA seems to do the unthinkable: it constantly tells the plant to stop growing! So what happens in spring to reverse this?

Over the entire winter, other genes are at work, too. Alongside the “Flowering Locus C” (FLC) gene, there are a few genes that code an interesting protein: “Vernalization Insensitive 3” (or VIN3). This one has a specific task: it shuts the FLC gene down! When the flower repressor gene is shut off, then flower formation can resume. 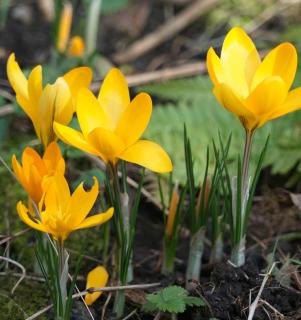 The vernalization insensitive protein is produced during winter. Two main factors influence how much VIN3 appears throughout the plant:

This matches almost perfectly what a normal winter cycle should look like. Indeed, temperatures stay cold for a long while. Furthermore, during winter months, even several days of sunny weather can’t lead to warm temperatures. Warm temperature days only still occur in late fall, when the ground is still warm from the summer sun. When they occur, they mean winter is still ahead!

So for as long as these conditions are fulfilled, the plant produces VIN3 proteins. As they slowly accumulate in plant cells, they slowly start “shutting down” the “flower repressor” gene. In effect, they’re starting to release the brakes! Come spring, their levels have accumulated to the point that the “flower-blocking gene” is now itself completely blocked. Hurrah! Nothing blocks flower blooming anymore!

A strategy that helps plants adapt to local conditions

This shows that plants have a complex way of timing their sprouting.

Indeed, a simple “green is go” type of grow signal can’t protect the plant well enough. A single day of warmer weather would lead to blooming, and the next day of freezing would kill all the flowers!

Scientists are still marveling at the elaborate system plants have come up with. Instead of a single cold-weather/warm weather switch, plants found a way to measure how much cold they were going through. This is much better suited to the situation that plants go through. Indeed, temperatures are unpredictable from one day to the next, even during winter. But, from one year to the next, the average temperatures and duration are nearly identical: the “amount of cold” they get is the same.

Plants succeed in scheduling their blooming based on this fact:

What this means for us gardeners

Blooming: plants don’t bloom if it might freeze again

Many fruit trees, and other plants, aim for the very start of spring. Their “brakes” aren’t set on too strong, and so the VIN3 protein quickly builds up in their system. They bloom very early and have a longer season to grow and spread. It’s risky because a late freeze might kill new growth off. The olive tree is one of these early risk-taking trees.

Other plants are more cautious and make sure that temperatures are warmer. Their “brakes” are set on high and/or they produce less VIN3 proteins: this triggers a later blooming. It’s a sure way to avoid cold weather, but they must make up for it with a shorter growing season. In extremes, some late-season fruits actually need the next cold to ripen: fruits that need bletting (quince, medlar, sloes…).

Gardeners and farmers have come up with units to “count” how much cold plants have experienced in the season: “chill hours” and “degree days“. Each species and variety needs a certain amount of chill hours to bloom well in spring.

Germination: seeds know winter is over to sprout

In a similar manner, plants use this technique to determine whether it’s safe to sprout or not. Ever wonder why you had to store bulbs and seeds in the refrigerator for weeks? It’s to help seeds produce the VIN3 proteins! If not, they would never “release the FLC brakes”: nothing has told them that winter has come and gone. The seed would stay dormant forever.

Plants that grow in pots suffer more from temperature swings. This is because they’re higher up off the ground so they don’t benefit from the underlying temperature. Furthermore, air circulates around the pot and warmth leaches out of it faster. The consequence of these temperature swings on potted plants is twofold:

5 keys for a beautiful winter garden
How should you care for your garden in winter? Snezana Gerbault, an agronomist and engineer, packed all her tips in…
Bulb flowers for a magical Spring moment
Hoping to feel the magic of Spring in the garden? Get ready for next year and dive into the fabulous…
Daphne, a winter flower shrub
In winter, at a time where flowers are dire, Daphne blooms enchant the garden. Key Daphne facts Name – Daphne…