Our grand-mothers keep saying they used the roots of a soap plant to build up a foam to wash their laundry. Saponaria is a perennial that’s quite common in our areas, and it helped solve a lot of people’s daily needs: shampoo, skin care, medicine…

Another plant that has even more saponin and that’s easier to use appeared recently on the “organic market”: soap nuts. Let’s take a look at all these different options to make soap from plants.

What is a soap plant?

Soap plants don’t actually make soap, but they contain a special compound called saponin (a synonym is saponoside) which is a natural detergent. Some plants produce this compound in various amounts. Their purpose for it is to fight off parasites.

How much saponin do plants have? 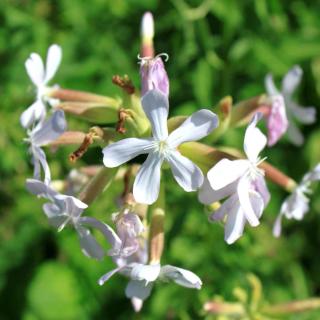 Saponaria, Saponaria officinalis, is a 1 to 2-foot perennial (30 to 60 cm). It grows in open areas up to altitudes of a mile (1600m). In olden days, it was grown in every garden along the Mediterranean basin, and can be found now most everywhere in Europe along ditches, railroad lines, near construction areas… Hippocrates mentioned it as a remedy, and its use seems documented as far back as 4 centuries before Christ. But this very hardy plant has probably been in use since Prehistorical times. It was probably originally native to Central Europe, and then spread to the rest of Europe as mankind learned to use it. The environment it first thrived in was the sandy, gravely banks of riverbeds. As other areas started gaining nutrients thanks to human activity, it colonized new type of terrain. Its rhizomes can easily be dug up and planted elsewhere, which makes propagation easy. Among other uses, the rhizome of this plant was used to scour wool, since it was great at removing animal grease before carding and spinning the fibers.

How to identify saponaria?

How to use saponaria?

Releasing the saponin contained in the roots is pretty straightforward: crush the roots and soak them in lukewarm water. It’ll form a nice lather when you start using the water. After filtering, the result is a mild laundry detergent that’s perfect for wool, does a great job whitening and removing greasy stains from laundry, and can also serve to wash the dishes. Saponaria extract also makes for a soft face and hair soap. 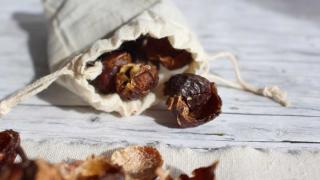 Soap nuts are actually only the pericarp, or flesh, that encases the seed itself of the Sapindus plant. This is a short deciduous tree that spread to the warm temperate and tropical regions of Asia and North America. Two species in particular, mukorossi and trifoliatus (which has smaller nuts) are capable of growing in poor soil. They’re planted in great numbers along roads in India and Nepal. Harvesting fruits from these roadside trees is a way for locals to add to their income, use for their own needs or package for export. Indeed, several industries have uses for large amounts of saponosides. The trees themselves help fight against soil erosion.

How to use soap nuts?

Saponin is also a natural insecticide, fungicide, and a growth stimulant for plants in your garden! It’s perfect to fight off parasites such as aphids. For pets, you can use it as an insecticide against fleas and ticks; it’ll also make their fur as soft as silk!