Nandina is a wonderfully beautiful shrub that many find appealing for its colored foliage and early summer blooming.

Nandina domestica is also called “Sacred bamboo”, because its leaves and stems look like those of bamboo. 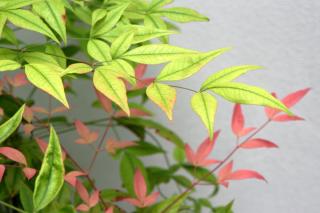 Ideally, you’d plant your Nandina domestica in fall or anytime up to spring while avoiding frost spells. If you must plant it in the sun, avoid places that would be too hot and if possible favor light shade. Also keep it away from permanent shade, since direct sunlight is what colors the leaves. 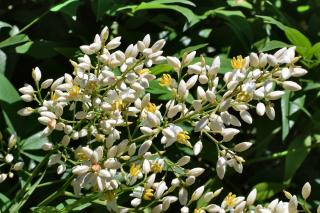 It isn’t really necessary to prune Nandina domestica. If you wish to reduce or rebalance the branches, trim your Nandina just after it has finished blooming. 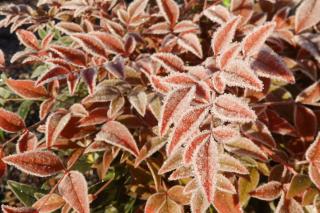 Nandina domestica, when winters are mild enough for it to keep its foliage on the branches all year long, will gracefully color your garden with fire-like hues. White flowers appear at the beginning of summer, but they don’t stand out much compared to those of other shrubs. 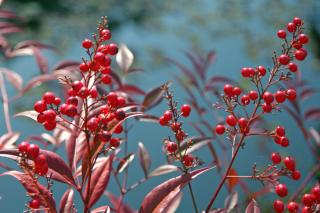 Nandina domestica also produces red-colored berries at the end of fall which often stay on the tree for the entire winter. Watch out, though: they’re toxic because of one of their compounds called nandenine. All the parts of the plant are in fact toxic for us humans – but not for birds! Birds love them!

Sacred bamboo, perhaps because of its toxicity, has also been used for its health benefits, especially in Asia. There, it’s prescribed as a light sedative, but it also has astringent properties, and is said to greatly help wounded muscles and bones.

It’s an easy shrub to grow, and will also do very well in a pot or garden box on your terrace or balcony. Mulch the base of the shrub to keep it moist and cool. Mulch also helps avoid weed growth, especially for potted specimens.

There are so many cultivars that we can’t list them all here, but each one will thrill you with its unique characteristics.

Smart tip about the Nandina bamboo

Plant daffodil or tulip at the base of the tree to create clustered spots of color in winter.

Choisya Sundance, the golden Mexican orange tree
Choisya ternata 'Sundance' is is a true marvel at the beginning of spring with its magnificent small white flowers and…
Climbers that keep their leaves in winter: an evergreen vine selection (with bloomers, too!)
Very useful on a deck, balcony or terrace, evergreen climbing vines help create a cocoon of greenery. These also produce…
Mind-soothing rock garden – set up your very own Zen Rock Garden!
If a certain corner of the garden is rebellious and resists all the plants you’ve tried growing in it, don’t…