A prized gift that often replaces flower bouquets: the orchid, and more specifically the phalaenopsis orchid, is very appealing. But how can the bloom be extended for more than a few months? 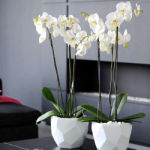 Orchids sold in flower shops and horticulture stores are hybrid varieties well suited to growing in apartments. Usually Phalaenopsis is one of the parents.

They cope well with moderate temperatures, but not when it gets too cold.

Best avoid dropping the mercury below 60°F (15°C). Also watch out for drafts when you go in and out of the room: move your orchids to a place where the temperature doesn’t swoop up and down.

In summer, you can bring them out to the garden and place them in the shade, preferably rather high up to keep them out of reach of slugs and snails which love eating them.

Recommended exposure for the orchid

Exposure is very important to succeed in growing orchids: they must be placed in a very luminous spot but without any direct sun, for instance near a window with a curtain to veil the light.

Once you’ve found the right space for them, don’t move them around, they loathe that!

Adequate light will ensure you’ll have the joy of seeing them bloom again every year.

Orchids hate excessive water but appreciate moisture. To give them the dose they need, water them once a week, draining the water out in the sink.

Never let the roots bathe in a saucer full of water! However, you can put the pot on a bed of gravel in which you’ll often add water, this will create a higher level of moisture around the plant.

The orchid requires food: a bit of fertilizer every two weeks.

Use common succulent plant fertilizer, but only half the dose written on the packaging is enough already.

Since it is a vine that hangs to trees in nature, the orchid grows airborne roots.

Potted, it must be placed in a substrate prepared from pine bark, peat and clay pebbles, which slowly evolves as time goes on, partly because of the fertilizer.

It is thus recommended to repot every couple years in a similar special mix.

Catalpa, a shade tree with amazing orchid-like blooms
Catalpa is a true garden-enhancing tree thanks to its unique foliage, especially in fall. This fast-growing tree is also very…
15 bathroom plants – these love moisture!
Here's a list of 15 excellent plants that will thrive in your bathroom. This room in the house usually gets…
Substrate and soil mix for orchids
Orchids are perhaps the plants for which the growth medium is the most critical element that influences the growing of…