Tomatoes come in many different varieties, some of which stand out when compared to others. This is the case for the ‘Black Krim’ tomato!

Origin of the ‘Black Crimea’ tomato

As its name shows, it originated in Crimea, a peninsula south of Ukraine. Its dark purple color also contributed to its name. The Black Krim tomato has only spread across the planet in the last 30 years. Its large meaty fruits (up to a pound or 500g) have a soft, yummy taste and are almost seedless – a key to explaining why they’re still as famous as ever.

use plastic water bottles with the top cut off for nursery pots. Plantlets will then create long roots capable of drilling deeper underground for minerals.

Whether you’ve bought them from a market or have grown them yourself, transplant your tomato seedlings to the ground in May, spacing them 16 to 20 inches apart (40 to 50 cm). For them to settle in well, slant each seedling in the hole and backfill to the point of burying the base up to the first leaves. This portion of the stem will sprout new roots, which increases the plant’s vigor overall.

Remember to stake your ‘Crimea black’ tomatoes as you’re planting them, so that that you don’t damage the roots later on.

All tomatoes, including the Black Krim, need water. Water it often at the base and don’t get any leaves wet. When fruits appear, start removing some of the lower leaves on the plant, to expose the fruits. This speeds the ripening process up.

Don’t get too zealous about this, though: after all, leaves are what help the plant grow and survive.

The main disease that affects the ‘Black Krim’ tomato is downy mildew. As for parasites, more often then not it’ll be cotton bollworm caterpillars and whitefly you’ll be dealing with on your plants. 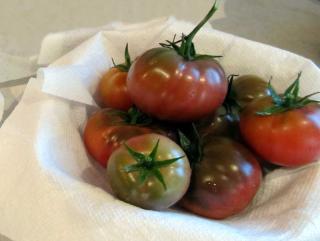 The Black Krim tomato is ready for harvest in a four-mouth window, from mid-July to end of October. To make the most of the nutritional benefits of this fruits, it’s best to let them ripen on the plant until the very day you need them. In case of excess ripe fruits, store them for about a week in the refrigerator. 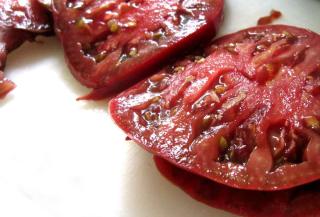 The fleshy fruit of the Black Crimea plant, and its soft-tasting flesh make it an excellent candidate for your summer salads. The deep color of its meat will contrast interestingly with that of other ingredients.

Get the timing ripe! When and how to harvest tomato
Ah, tomato! Summertime wouldn't be the same without it! Delicious in so many ways, refreshing and nutritious, always a timely…
Pruning tomato plants, let those shears run loose!
Should you prune your tomato plants? Experts admit that both "Yes" and "No" work very well, so take your pick!…
Tomato early blight, the dreaded Alternaria fungus: alternatives to beat it
This blight is a true plight! Early blight covers tomato plants with black spots, and even makes the fruits inedible.…