It is often found growing in vacant lots, trails, on rocky ground or cultivated lots.

Once all but forgotten, feverfew is now reappearing in the medical context thanks to the work of Doctor Sterwart Johnson of the London Migraine Clinic. In 1970, he undertook a set of clinical trials to try to soothe the strong chronic migraines of a lady patient.
However, the therapeutic effectiveness was formally proven in the 1990s.

Today, both the World Health Organization and the ESCOP (European Scientific Cooperative on Phytotherapy) acknowledge the positive influence of feverfew leaves in preventing headache.

So, what are the properties and benefits of this plant? Does it also have other effects on health? Is the word health benefits truly relevant? Which would they be? How can it best be prepared to maximize its effects?

Here is what you need to know…

The root meaning of the name of this herbaceous perennial derives from the Latin word “parthenium” which itself was picked from the Greek word “parthenion” which means “virginity“.

Feverfew belongs to the Asteraceae family and is sometimes known under the names bachelor’s buttons, golden pyrethrum or featherfew. It is a medicinal herb used in Greek and Roman times and subsequently by European herbalists.

As for its leaves, they’re covered in light velvet and are very fragrant. Somewhat tube-shaped, they are either yellow or white and are grouped in corymbs. The fruit is dry and only harbors one seed.

The blooming of this plant is also very ornamental from June to August.

In use for over 2000 years, bachelor’s buttons is known to reduce the occurrence and intensity of migraines thanks to the leaves that contain parthenolides.

Indeed, the properties of this easy-to-grow plant are known to include constriction of blood vessels in the brain and also to reduce muscle spasms which are often a cause of frequent severe headaches. 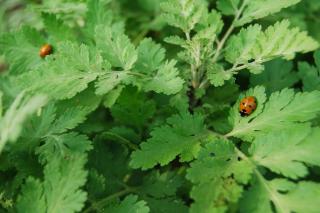 The scope of feverfew activity is quite wide. Among other properties, it may be noted that this plant exhibits properties that are:

– anti-inflammatory thanks to the flavonoids and parthenolides it contains.

It also has activity that is qualified as:

– degranulation hindering for granulocytes and it also releases enzymes involved in inflammatory processes.

Herbalists use the fresh or dried leaves of the bachelor’s buttons plant.

To prevent migraines, the following is recommended:

– either the dried leaves (capsulized or whole), for which it is recommended to chew from 125 to 250 mg of leaves, or take the equivalent in the form of dried leaf powder capsules,

– or fresh leaves (which taste bitter and of camphor), in which case simply chew two to three feverfew leaves a day,

– or freeze-dried leaf capsules (standardized to 0.2% parthenolides) or tabs. As for dosages, follow the guideline of taking 125 to 250 mg a day.
However, check the manufacturer’s information.

Nota Bene: It takes from 4 to 6 weeks for the effects of bachelor’s buttons to be felt. Whatever the case, you should never extend treatment for longer than 1 month in a year.

Nowadays, feverfew is sold as essential oil, herbal tea, tabs and capsules.
Using this plant is strictly forbidden to persons allergic to plants of the Asteraceae family, like dandelion, daisy, purple coneflower…

Because of its significant impact on the hormone system (triggers menstruation), feverfew is contra-indicated for pregnant women.

Good to know about feverfew

For some persons, it can lead to mouth ulcers in case of prolonged chewing.

– feverfew is different from German chamomile. The latter of the two doesn’t boast the same migraine-controlling properties and in no case can replace feverfew.

– bachelor’s buttons is different from both chamomile and roman chamomile, which both are additional distinct medicinal herbs.

– feverfew is a relative of the famous chrysanthemum flower, which explains why it shared active compounds like pyrethrum with the latter. 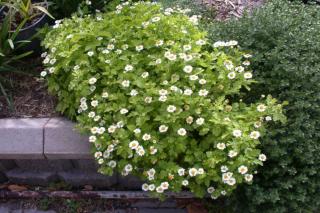 As of today, it is possible to find feverfew extracts with specific compounds, for example with high parthenolide contents, or tinctures…

However, the associated therapeutic benefits haven’t yet been studied in clinical trials to this day.

Note that herbal tea sold in nutrition stores under the name “chamomile” are in reality chamomile Matricaria chamomilla, not feverfew.

If in doubt, remember to ask your consulting physician.

Credits for images shared to Nature & Garden (all edits by Gaspard Lorthiois):
Feverfew flowers by Ross Dunn under © CC BY-SA 2.0
Ladybugs on feverfew by LearningLark under © CC BY 2.0
Clump of feverfew by Graibeard under © CC BY-SA 2.0
Meet the community
Need advice? Share your garden joys & woes!
Live from the forum
Beans with healthy huge leaves but no fruits Dracaena marginata kiwi stalk health lupine healthy but leaves beneath are curling up