Home » Gardening » The fruit Orchard » Quince, grown for thousands of years yet unknown of all

So you’re bored with the usual apple sauce or strawberry jam, these are sooo conventional. Why not innovate and try a new fruit – quince?

Grown and harvested from the quince tree which can reach heights of 16 to 20 feet (4 to 6 meters), quince has been cultivated for at least 4 000 years.

Native to Iran, its cultivation spread across the Mediterranean area during Greek and Roman times. Greeks considered the fruit a gift of the goddess Venus. Each bride had to savor a quince before her first night with her husband. 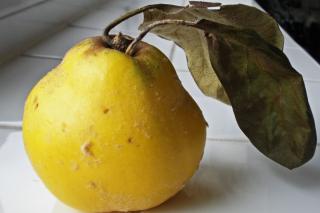 Some historians associate the fruit to the apples in the garden of the Hesperides. At the time, it was called the “Cydon apple” or “Cydon pear”, named after a region in the North of Crete. Until today, quinces shipped from that area are still the most favored by connoisseurs. In other European countries, quince is grown in small orchards in a variety of latitudes.

Three varieties dominate the market currently: the ‘Champion’, the ‘Vranja Giant’ and the ‘Portuguese quince’.

Eat baked in the oven, or cooked as jam or jelly 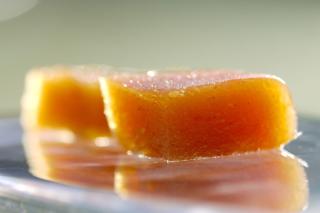 When raw, the fruit is too astringent to be eaten. Peel it before cooking.

Hint to make it softer: dip the fruits in boiling water for 15 minutes and pull them out to cool. The fruit will then become much easier to peel with a peeling knife.

Add a splash of lemon juice to keep it from turning dark. Jelly, fruit paste, cakes or poultry or lamb tajines are just a few of the many recipes you can prepare from quinces, both sweet and salty.

Steps to prepare the recipe:

Remove from oven, slice magrets into ½ inch (1 cm) slices and serve with the sauteed quince.

Credits for images shared to Nature & Garden (all edits by Gaspard Lorthiois):
Basket of quince by madras91 under © CC BY 2.0
Single fruit by Amanda Slater under © CC BY-SA 2.0
Membrillo by Rebecca Siegel under © CC BY 2.0
Duck magret by Rita under Pixabay license
Meet the community
Need advice? Share your garden joys & woes!

Quince tree, where the quince comes from
Quince tree is a very beautiful fruit tree, that bears nice fruits called quinces. Key Quince facts, a short list…
5 shrubs that birds find inviting in the garden
Here are 5 ideas of shrubs that birds love using for shelter. Each one is a dream come true for…
Quince health benefits and therapeutic value
Quince, or Cydonia vulgaris is harvested from the quince tree and is a fruit that has many health benefits for…