Home » Gardening » Trees and shrubs » Katsura tree – is your tree male or female?

Learn to tell male and female trees apart for the beautiful and fragrant katsura tree.

The key is to look at the flowers. Male tree flowers are a distinctive pale-red color, whereas petals on flowers of a female tree are white-green-colored and harder to see.

What is a dioecious plant?

Examples of other trees that are dioecious include yew, yaupon, poplar, maple, juniper and many more. In the fruit tree realm, a good example is the kiwi tree.

How to tell the gender of a katsura tree

So before you go ahead planting a katsura tree, take a look at the flowers.

The flowers are how to tell the trees apart clearly.

Flowers of both Cercidiphyllum species are almost identical. 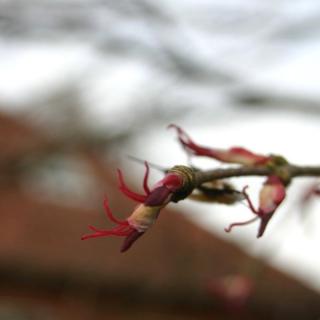 Ladies first! The flowers on a female Cercidiphyllum are very small. Like their male counterparts, they emerge from the same buds that will later produce leaves.

The petals form a sheath, and on female flowers they never really open up.

From within this sheath, several long, twirly “styles” extend. They look like tentacles close up!

The style is the part of the female flower that collects pollen from the air and channels it deeper into the flower to the ovary. The tip of the style is called the “stigma”, and it’s usually very sticky for pollen to adhere to. 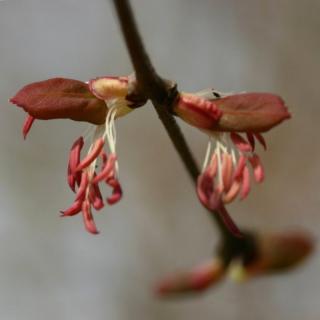 Male flowers aim to spread pollen out as far as can be. That’s why it has pollen-bearing sacs called “stamens” that hang an inch (2-3 cm) out from the branch.

This wind-pollinated tree decided it wanted to travel far!

If something strange appears, it’s either a female tree bearing pods, or a (rare) type of plant gall. 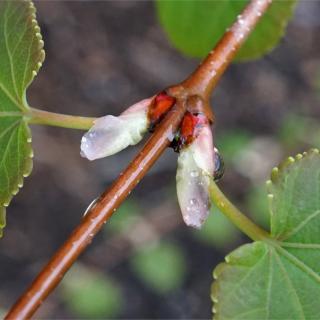 Petals remain on the branch for a long time, even after the stamens have fallen off. This helps determine whether the tree is female or male, too.

On a male tree, after the blooming, petals remain attached and help protect young leaves.

On a female tree, the petals fall off as clumps of pods start to form.

Seeds of the katsura tree

Pods contain from 2 to 4 winged seeds. The germination rate of katsura seeds is highest when the ripe pods burst open.