Not only do elves and fairies hide in its branches. Birds do, too! They build their nest in it to protect their offspring

and snack on its radiant red berries. Evergreen and resilient, holly is a prickly thug with a soft heart after all.

It is the only tree with evergreen leafage that survives in Northernmost areas that isn’t a conifer. This sturdy and hardy tree easily makes it to over 200 years old. Over 400 distinct holly varieties have been identified for this world-spanning plant. Thanks to their shape and varied colors, holly makes for excellent ornamental shrubs that are well suited to small, modern gardens.

How to use holly 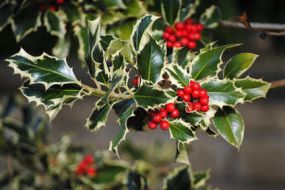 Holly must be sold to you with its clump or in a container. Plant it in light soil, deep and preferably acidic. Holly generally tolerates chalky ground, but it doesn’t fare well in heavy terrain. Open up a large hole two weeks before planting for the soil to loosen up around the edges. Settle the plants in in fall in mild-weathered climates, and in spring in harsher areas. It is wise to protect younger specimens from strong winds with a windbreaker. Full sun is just as good as shade. Varieties with mottled leaves will be advantageously planted in more luminous spots. Avoid drafty emplacements that tend to dry up. Water the leaves often during the first two summers. If it snows in winter, shake up the holly shrubs to make the snow fall off, or the youngest sprigs might break off.

Holly can be pruned without restraint, and even shaped to match various topiary forms. It must be pruned at every stage of its growth (usually June and September) for it to keep the intended shape. Of course, you can cut sprigs off to decorate the house for Christmas. Holly hedges must be pruned in March, just before the vegetation phase, to clear it up a bit. Growth is quite slow, not more than 6 to 8 inches (15 to 20 cm) a year. Planting distance: 32 inches (80 cm) to 10 feet (3 meters). Note that except for very specific cultivars, pairing female and male specimens is required for fruits to be born.

To learn more about holly

One of the most astounding collection of holly varieties in the world is located in France. Pierre Paris, the owner of a piece of land in Meung-sur-Loire (phone: +33 2 38 63 10 49) turned his lot into a national holly conservatory.  Pierre Paris’s collection numbers over 400 distinct holly varieties.

The complete guide to spending December in the garden
Here it is! Winter frost is back and sometimes even snow which lead us all up to Christmas! Although December…
Schlumbergera, the Christmas cactus
Schlumbergera, also called Christmas cactus, is a cute succulent plant that blooms in fall or winter. Summary of Schlumbergera facts…
Dwarf Yaupon holly, a colorful berry shrub
Dwarf yaupon holly is a special variety of yaupon. Its leaves aren't as prickly as other holly bush varieties, and…