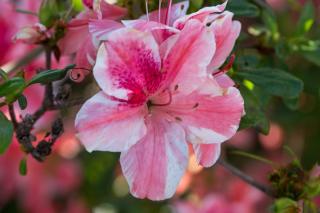 Abundant flowers and evergreen leaves, both of which come in hundreds of hues… the azalea truly is a magnificent shrub. Part of the vast Rhododendron family, it’s a prime favorite of many gardens. It has a vintage look that makes it a hot choice for people who don’t yet have one themselves!

Discover the new Encore® varieties. These are the result of multiple hybridization, and plant lovers will love it all the more for its characteristics.

Conventional azalea bloom for a short time in April-May, whereas the Encore series – French for “again” – naturally blooms several times within the year: in in Spring, from March to April, the first bloom virtually covers the bush.

Then, new flowers appear from July to August, and even from end of September to October-November, especially when there’s a lot of sun.

These second and third blooming seasons can also display quite a cover of flowers, even when planted only in a pot. It’s a truly remarkable flower.

Lots of other Azalea perks, too 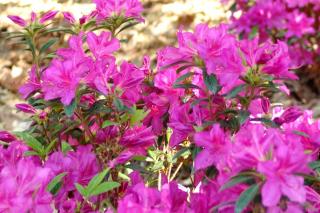 Let’s compare yet another trait of this new breed to its relative, the common azalea. Normally, azalea is known to prefer part shade. The Encore azalea, however, not only thrives in shade, it can also grow very well in full sun. A great way to add more fun to gardening, both in pots and in growing beds.

The series includes a number of different-colored varieties: raspberry pink for the Cardinal, light pink for the Débutante, flashy pink for the Sangria, blood-orange for the Sunset, white with pink comets for the Starlite…

Flowers are sometimes simple, double, or even semi-double. Most are low-growing, but some reach medium height and a few even get quite tall. Combinations ready to suit every garden!

As a last poetic tidbit, the traditional saying about Azalea goes thus: It’s the flower that symbolizes the first sign of true love.

Regarding care and maintenance, these varieties love acidic soil that drains well, though they don’t like drought. Give them a little fertilizer in Spring.

Smart tip about the Azalea encore

Pair it with the sun-loving Sunpatiens to create a full-sun garden bed with plants that should have been in part shade! Your neighbors will have trouble believing their eyes!

Azalea, caring for it well
Azalea shrubs are enchanting straight from the first day of spring, whether your azaleas are indoors or outside. Azalea key…
Allergic to pollen? Types of plants to avoid, and what to replace them with
Sneezing, red eyes, runny noses... spring is the time when allergy-triggering plants spread their pollen. A horrible season for allergy-prone…
Azaleas, delicate winter flowers
With their bright flowers, so rare and precious in winter, azaleas are classic gifts for Christmas and New Year joys.…