If a certain corner of the garden is rebellious and resists all the plants you’ve tried growing in it, don’t give up! No need to let weeds take over – turn the area into a relaxing Zen rock garden.

Raw mineral power will boost the mind and free your spirit like nothing else!

Those among us lucky to have visited Japan have surely heard of the Ryoanji gardens.

No need to travel to Japan to see this mind-soothing Zen rock garden, though! Indeed, there are even a few replicas in Europe and America, too.

The original Ryoanji zen stone garden is too large to rebuild at home. Much better is to compose a miniature “karenasui” (dry garden, in Japanese) of your very own.

Mark out a rectangle of about a dozen square feet (a few square meters).

Your Zen garden is ready! The only maintenance you’ll have is the meditative raking of the sand after it rains. Rake new wave patterns on the spattered sand. 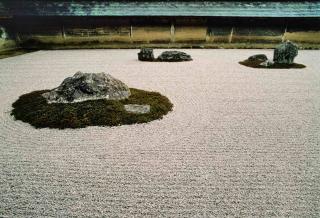 In the original Ryoanji garden, the 15 boulders are artfully placed so that not all are visible at the same time.

Group your own rock-boulders by threes. Try alternating shapes so that the silhouette they form looks like something special.

Sitting cross-legged in front of such a minimalist space will do wonders to clear your mind. Over time, you’ll accumulate hours of restful meditation.

Creating one of these in your own home will give you an extra place to use to get away from other people. Perfect to get a breather from a crowded house, or simply to maximize social distancing in the garden.

Even you don’t have an outdoor garden you can still have the benefits of zen meditation with an indoor rock garden.

Some kits are for sale, but you can easily build your own with a handful of sand and a few nice pebbles.

Apricot health benefits and therapeutic value
Apricots, or Prunus armeniaca, are the fruits of the apricot tree. They belong to the Rosaceae family. This soft, sweet…
Plumeria, a plant that stands out!
Plumeria is one of those superb flower shrubs, used indoors for its exceptional blooming and its incredible ornamental value. Principal…
Preparing fermented rhubarb tea
A natural pest control solution, use fermented rhubarb tea during the plant's entire growth phase. It is also possible to…