Let it be known to all: every single double-flowered daffodil variety is a fabulous early spring bloomer!

Plant in fall, you’ll get tantalizing sensations when it blooms in spring.

Double daffodils are daffodils with many more petals than the usual. Due to rare natural changes, petals appear instead of other plant parts: pistils, sepals…

This, a daffodil? Yes, it is! And it boasts double flowers, which means – logically! – twice as much pleasure! Double-flowered daffodils are true spring flowers and they’ll lead you to feel true happiness when they bloom in April. What makes this flower so special is that the corolla has several petals, to the point that the entire flower is pure petal goodness!

Double daffodils exist in all the possible shades of yellow, and also in ivory cream, white, orange and any combination of these you can imagine. And did you know they were perennials? They’ll come back all on their own next year!

Ah, the Narcissus is in Love!

Where does the Narcissus name come from? It’s actually a dramatic episode in ancient Greek mythology: 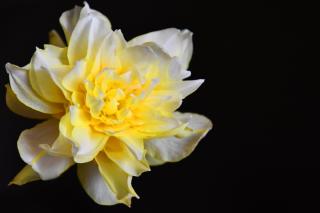 When the handsome youth Narcissus saw his own reflection in a pond, he fell insanely in love with his own reflection. And since every time he tried to touch his mirror-self, it wavered and disappeared, and he slowly withered away as he longingly sighed after himself. His body disappeared, but what was left was a beautiful yellow flower, the daffodil.

To this day, the flower commemorates this event through its symbolic name: Narcissus. This year, double daffs are all the rage, since this prize bulb won several prizes in shows!