Home » Gardening » Trees and shrubs » Reducing thuja, a battered look for a year, before bursting back!

Thuja, or Arborvitae, is a long-living tree that just keeps growing. If you miss a few pruning seasons, you’ll have to cut it back hard! Here’s what Michel experienced.

A short note before beginning, from Michel himself:

I think is this operation should be done when the branches are very thin as later it becomes very drastic. My wife was not impressed in the least when I did it.

It’s always much easier to prune regularly, than to recover a runaway tree!

This conifer excels at creating an opaque privacy hedge. It grows a new breadth of dense, lush green growth from the ends of the previous year’s growth. Every year, from 2 to 8 inches of new leafage appears (5 to 20 cm) in all directions, depending on exposure and the growing environment.

Normally you should try to trim it twice a year or more.

In this article, we address the fact of halving the size of a thuja tree. In this case, it doesn’t form a hedge, but the same principles apply.

Cutting back an overgrown thuja

A two or three-year process

Cutting back a thuja to half its height or even less is possible. This shrub can take a very hard pruning. However, it often results in a very bare, lopsided appearance for years. Sometimes, if it’s done too brutally, it stays ugly for up to a decade.

With these steps, you can get to a beautiful end result within just a couple years, three at most.

1- In early spring, cut the top off of your thuja.

Cut the top off slightly below the height you want it to be in the end. The top of the shrub will form a “plateau”. It’ll make the tree look a bit like a cone with a cut top, or even a sphere, after your efforts. The advantage is that it lets light enter to the center of the tree, triggering growth there.

Make the cut a bit slanted so that water runs off easily. This will also favor buds emerging near the tip of the slant, helping form a new leader stem.

Don’t be afraid of lopping the top off since dense re-growth will cover the tip up. As you’ll keep reducing the rest of the tree, topgrowth will resume, and that conical look will be back within a year or two.

2- At the same time, “thin” branches with a checkered pattern.

Spend time creating a “checkered pattern” all around the shrub. The goal is, after pruning, to create openings for light to enter as regularly as can be.

How to create this pattern? Reach in and snip a branch off to create a hole as big as an open hand, then do it again at a hand’s distance, and so on. It’s as of you were drilling holes along the side of the tree, making Swiss cheese out of it! That way, buds will sprout deeper in the tree, and you can cut back more in the following year.

Ideally, aim for reaching about a foot into the tree (30 cm).

It’s a lot of work! It’s possible to make larger checkers to go faster/further in, but then it gets more noticeable.

At this stage, the old, wide-reaching branches are very lush. New shoots appear deeper in the holes in the checkered pattern. Prune with a hedge trimmer, either the scissor-type or an electric/gas powered one. The goal is to remove a lot more material from the older branches, but still barely remain within their “green-leaf” zone.

After you’re finished, the shrub will look dry and brown nearly all over, but there will be checkered spots of new, lush growth in the (previously) deeper portions. 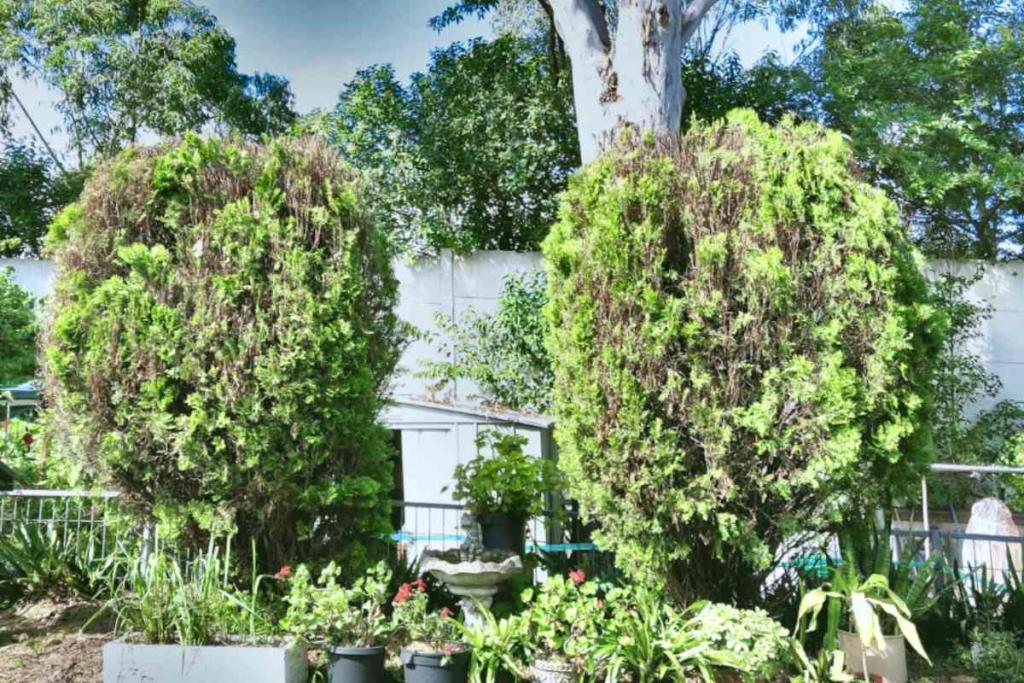 Second year and third year, leveling out and shaping it up

Second year: invert the checker-pruning & work on the conical shape

In the second year, in spring, prune heavily into the portions that last year were left long. It’s like “inverting” the checkered pattern. Last year’s growth from the first deep checkered pruning now come to the forefront. New, deeper holes appear where branches were longer.

Come late summer, prune/trim heavily again, reducing the thickness of the shrub to its final size. You’ll now come more or less level with the depth of the second checkered pruning. 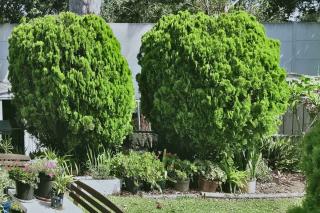 In the third year, maintain the size and work on the shape. Prune normally in both spring and early fall.

This technique has the advantage of fully preserving an opaque hedge. It also guarantees that it quickly returns to an appealing fullness and color.

Need to shrink it more? Repeat!

With such a method, you can reduce the thickness of your runaway thuja by about 2 feet (60 cm): 1 foot in the first year, 1 more in the second. If you need to shave off even more, repeat the 2-3 year cycle: you’ll eat into the shrub by a full foot for every year you keep inverting the “checkered pattern”.

Set up a mixed hedge, different shrubs for year-round wonder
Setting up a mixed hedge fulfills all the functions of a normal single-species hedge, and provides an added aesthetic touch…
Laws and regulations on trimming hedges: to trim or not to trim, that is the question!
Hedges are important for biodiversity. Birds, for instance, love building their nests in them. It makes sense to regulate when…
All there is to know about pruning hydrangeas
Hydrangea is a beautiful shrub, and pruning helps boost blooming and makes the plant healthier. Pruning a hydrangea is an…