Scale insects appearing on a ZZ plant is a rare occurrence. Getting rid of them isn’t too difficult onZamioculcas zamiifolia.

Facts about scale on a ZZ plant

Thanks to Jessica Everett for sharing her experience!

Identification of scale insects on a ZZ plant

Scale insects feed by sticking their sharp mouthpieces into a leaf vein.

Females secrete a waxy cover under which they lay eggs that hatch after two to three weeks. This cover looks like a brown oval about a fourth of an inch (5 mm) long.

How to treat against scale insects

The best recipe is to mix following ingredients:

Spray this solution daily for 3 to 4 days.

If the plant is overrun with scale insects

First, get rid of most of the pests by hosing the plant down with water using a showerhead or low-pressure powerwasher.

After that, apply the spray as described above.

If the pests are few and sparse 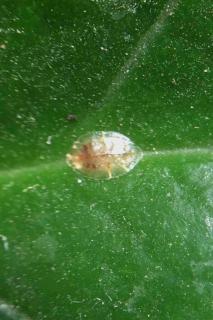 Usually, you’ll catch the invasion early on. It’s great to act fast, since a single scale insect can lay hundreds of eggs, and do so multiple times…

Scrutinize your plant with a cotton bud or wad of cotton dipped in high-content alcohol (vodka, gin, or rubbing alcohol work fine). Every time you see a scale insect, swab it over and remove it. The alcohol dissolves its waxy protection.