Montbretia is a nice perennial that is making a true comeback in our gardens.

As easy to grow as it is beautiful, it also looks a lot like gladiolus, but smaller, thanks to its lance-shaped leaves and flowers staged along a long scape.

Ideally, montbretia is to be planted in fall or in spring for it to bloom in the following summer.

Dividing a clump of Montbretia

Every 3 years, divide the montbretia bunches and separate the bulbs for the base to regenerate.

If sowing, best to sow in pots in September-October.

Pruning and caring for montbretia

Montbretia, also called crocosmia, is a very easy perennial to care for and practically doesn’t require any care when it is properly settled in.

Once the leaves have wilted to brown or yellow, you can cut the whole clump down to the ground.

Caring for montbretia in winter 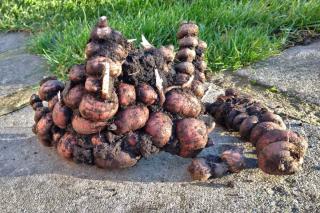 After cutting back wilted leaves, you can work on protecting the underground bulbs against winter colds.

Both in pots or in the ground, montbretia holds to freezing on the condition that the freezing be neither too cold, nor too long, around 23°F (-5°C).

In case of long, severe winters, you must absolutely protect your montbretia corms. 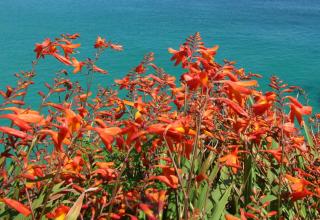 Leaves are a beautiful luscious green while its flowers grant us with warm, shimmering colors ranging from yellow to red and orange.

Particularly easy to care for, it even resists mild winter frosts, as long as they aren’t too cold, 23°F (-5°C). It’s also important they don’t last too long.

Certain varieties are even hardy down to 5°F (-15°C) if the soil isn’t waterlogged in winter.

To optimize its lifespan, offer it bulb plant organic fertilizer every year after the blooming. Regularly split and thin the bulbs, since their multiplying can quickly make the plant seem invasive.

A colorful garden with summer flowering bulbs
In flower beds, pot arrangements or smack in the middle of the lawn, summer-flowering bulbs provide colors and enjoyment. Plant…
Freesia, colors and fragrance
Freesia is a superb bulb flower, both extremely ornamental and fragrant. First Freesia Facts Name – Freesia Family – Iridaceae…
Bearded iris, the garden iris
Bearded iris is a perennial that is as easy to grow as it is ornamental when it blooms. A summary…