Both in Muslim lore and in Christian legends, the Virgin Mary is an important figure. The cyclamen flower is associated to Mary, the mother of Jesus. Let’s take a look at the reasons behind the spiritual meaning of this flower.

Native to the Middle East and Eastern Europe, the Cyclamen has long been part of daily life in tribes and nations of the area.

It has many names in each of the dialects and languages that are heard there. Some of the more surprising names are in Arabic and Hebrew:

Turkish sultans in the 16th century would burn incense prepared in part from cyclamen flowers, together with sandalwood and aloe. This preparation needed days to brew and was exclusively meant for burning within the marvelous palace of Top Kapi.

Another more intriguing name is “Incense of the Virgin Mary“. This refers to the virgin from whom Jesus was born.

Several different connections exist between the flower and this maiden of old.

As a result of this association, incense prepared from cyclamen was used in churches that were dedicated to Mother Mary. Cyclamen bouquets and floral arrangements often decorate chapels and are set at the foot of Marian statues.

Sadly, most cyclamen types sold in stores aren’t very fragrant. Those that smell best are often found in the wild, and it’s difficult to come across them in regular horticulture stores!

A flower that helps cope with sorrow 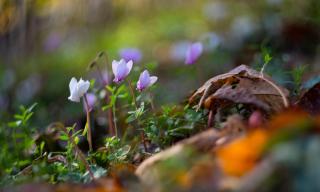 Since it flowers in fall, when All Saint’s day is celebrated in the Western world, Cyclamen is often one of the flowers brought to honor the dead. Pots filled with blooming cyclamen decorate tombs and cemeteries, together with chrysanthemum.

Likewise, during funerals, the pink, white and violet hues often adorn altars and burials, where they bring peace to mourning relatives and friends.

However, outside of these dramatic events, Cyclamen truly brings joy and color to otherwise drab and gray winter days. Like hellebore, cyclamen will bloom even when the weather is freezing!