Berberis thunbergii is a beautiful berberis shrub, especially because of its blooming and its scarlet red berries that make birds tweet with joy in winter.

Foliage – deciduous or persistent depending on the variety
Flowering – April-May

It is preferable to plant Berberis thunbergii in fall to favor root development before winter hits, and thus ensure proper growth in spring.

It is possible to plant in spring specimens purchased in containers. In that case, water more diligently when the first heat waves hit, and/or if days on end go by without rain.

You can also grow many cultivars as indoor Berberis plants, in containers.

Pruning and caring for Berberis thunbergii

For Berberis thunbergii hedges, go for one pruning each in fall and spring to shape it into the silhouette you desire.

As a standalone, Berberis thunbergii can be pruned back in fall more or less by ¼ its height in order to boost blooming in spring. 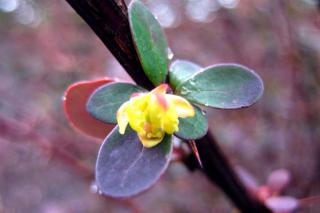 Berberis thunbergii, native to Japan, is considered a thorn bush, but they are much less prominent than other species in the same family, since its thorns aren’t as sharp.

It has been grown in Europe since the 19th century.

It now encompasses several hundred species and this provides for a variety of shapes and colors. Some grow taller than a person, but dwarf berberis cultivars stay small enough to grow wonderful low hedges.

It can be found with either green or purple leafage and the blooming ranges from pink to white through yellow and orange.

It produces nice bunches of yellow and red colored flowers that transform into red berries that make birds sing with joy since they stay all winter long.

This shrub’s hardiness deserves respect and you won’t need to add any fertilizer or other maintenance amendments.

Barberry, original and ornamental
Barberry is an original shrub much appreciated for its foliage, defensive properties and blooming. Basic Barberry facts Name – Berberis…
Barberry bonsai, how to grow one from scratch
Barberry (Berberis) can be grown into impressive bonsai specimens. Try your hand on this unusual way to grow barberry! Barberry…
Dwarf Barberry varieties, berberis for low-lying hedges and wonderful shrub beds
Several types of barberry naturally grow small. These dwarf varieties won't grow into towering, thorny giants that are difficult to…